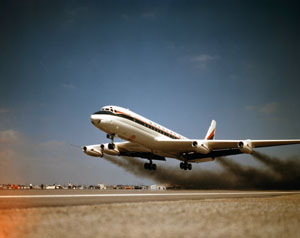 The DC-8 was the first Douglas jet-powered transport. It entered service simultaneously with United Airlines and Delta Air Lines on Sept. 18, 1959. Powered by four jet turbine engines, the DC-8 was capable of speeds of more than 600 mph (966 km/h). In a test dive, it became the first commercial transport of any kind to break the sound barrier. Throughout its 14-year-long production run, the DC-8 went through seven major variants, for a total of 556 aircraft.

The basic domestic version, the DC-8 Series 10, had increased fuel capacity for intercontinental flights, and the Series 30 and 40 were the first to use the 17,500-pound-thrust (7938-kilogram-thrust) turbojet engines.

The DC-8 Series 60 extended the length of the fuselage. Nearly 37 feet (11 meters) longer than the original model, in an all-economy passenger configuration, the DC-8-61 could carry 259 people. Its convertible-freighter configuration had a cargo volume of 12,535 cubic feet (3820 cubic meters). The DC-8-62, for extra-long routes, had a fuselage stretched 6 feet 8 inches (2 meters) longer than the original model and 3-foot (91-centimeter) wingtip extensions.

All design improvements of the DC-8-61 and -62 were incorporated in the DC-8-63. The -63 could fly more than 4,500 miles (7242 kilometers) nonstop, carrying 259 passengers because of its extended fuselage; aerodynamic improvements to nacelles, pylons and flaps; and increased wingspan and fuel capacity.

The DC-8 Series 70 was a re-engined version of the popular Super 60 Series, substituting CFM56 engines for the latter’s Pratt & Whitney engines. The result was an aircraft that retained the Super 60 operating weights but with a longer range due to the newer, more fuel-efficient turbofans. The Series 70 was also able to meet later, more stringent noise regulations that were implemented in the 1980s.

In 1995, more than 300 DC-8s remained in service, making more than 340 scheduled flights a day. In January 2013, Aviation Week Intelligence Network’s Fleet Database reported that there were 36 DC-8s left in service worldwide.