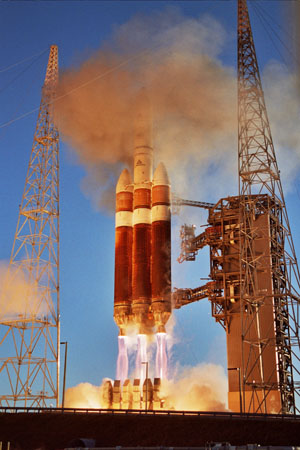 Delta’s history stretches back to the late 1950s when the U.S. government, responding to the Soviet Union’s launch of Sputnik in 1957, contracted for development of the rocket. These early Delta rockets derived their design from Thor, the U.S. Air Force’s intermediate-range ballistic missile. The first successful Delta launch was of NASA’s Echo 1A satellite on Aug. 12, 1960.

The Delta legacy grew with launches of the Tiros and GOES satellites, beginning in 1960, which revolutionized weather forecasting, and the first Telstar and Intelsat launches, which enabled the now-famous TV phrase, “Live, via satellite!” The Explorer research satellites provided data about energy fields and particles that could affect communications satellites, while NASA’s Pioneer probes undertook a long series of space exploration missions.

Until the early 1980s, Delta served as NASA’s primary launch vehicle for boosting communications, weather, science and planetary exploration satellites into orbit. In 1981, the U.S. space shuttle changed U.S. space policy, and after 24 years Delta production halted, as NASA planned to use the shuttle for satellite launches.

However, in January 1986, President Reagan announced that shuttles would no longer carry commercial payloads, opening the way for the return of Delta. Following a contract from the Air Force for 20 launch vehicles, the newer, more powerful Delta II version emerged in 1989.

In response to market needs for a larger rocket to launch commercial satellites, Delta III began development in 1995. Its first launch was in 1998 and its final launch in 2000, paving the way to the next configuration of the Delta rocket, the Delta IV.

Each Delta IV rocket is assembled horizontally, erected vertically on the launch pad, integrated with its satellite payload, fueled and launched. This process reduces on-pad time to less than 10 days and the amount of time a vehicle is at the launch site to less than 30 days after arrival from the factory, reducing cost and increasing schedule flexibility.