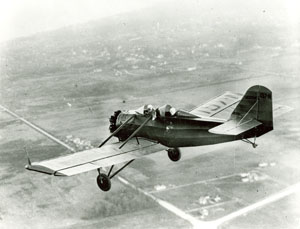 The Doodlebug was the first airplane James McDonnell both designed and built, but it was doomed by its timing — it was produced just before the Great Depression.

The Doodlebug was a two-seat, low-wing monoplane that was pleasant to fly and fun to watch. It had spectacular takeoff and landing capabilities, and it seemed to have a good chance of winning McDonnell the stake he needed to start his aircraft-building business.

On April 20, 1927, the Daniel Guggenheim Fund for the Promotion of Aeronautics sponsored an international Safe Aircraft Competition. The prize for the winning design that demonstrated a real advance in the safety of flying was $100,000.

James McDonnell and his two engineers, Constantine Zakhartchenko and James Cowling, entered and, despite a shortage of funds, built the Doodlebug in a hangar provided by the Hamilton Aero Manufacturing Co.

Lack of funds and bad luck slowed production. The Doodlebug missed the Oct. 21, 1929, deadline, but was granted an extension. However, during a test flight on Nov. 21, 1929, the horizontal tail of the Doodlebug folded, and the plane crashed. McDonnell rode the airplane to the ground and suffered severe damage to his back. But the airplane showed so much promise that it got a second extension. However, the engine failed as the Doodlebug was being ferried to New York for the competition, and the plane was damaged again. It never had the chance to compete for the Guggenheim purse.

McDonnell did not give up. He took the Doodlebug around the country, flying for various air shows. Then the Depression eliminated the private market, and nobody could afford to buy the airplane. Finally, in 1931, McDonnell sold the Doodlebug to the National Advisory Committee for Aeronautics (NACA — now NASA), which used it as a test airplane. McDonnell would not get to produce another airplane of his own design until 1945.