The DWC was a modified version of the DT-2 torpedo bomber the company had built for the Navy, but its fuel system was completely redesigned to increase capacity from 115 gallons in the DT-2 to 644 gallons for the DWC. Other changes included using a different vertical tail with extra bracing struts beneath the tail and bringing the pilot's and flight mechanic's cockpits closer together to improve communication between the two.

The DWC retained the DT-2's 420-horsepower Liberty V-12 engine, but two different-sized radiators were included, the larger one for use in the tropics. Finally, the DWC's undercarriage was designed to be easily changed from wheels to floats for operations from land or sea. The prototype, built in 45 days at a cost of $23,721, was delivered to the Army for evaluation in November 1923. Soon after, Douglas received a contract for four production aircraft.

On March 17, 1924, four DWCs and their eight crew members left Clover Field, Santa Monica, Calif., for Seattle, Wash., the official starting point. While in Seattle, Boeing employees exchanged the planes' wheels for pontoon floats for the long over-water portion of the flight. It was also in Seattle that the planes were formally named for four major American cities, representing north, south, east and west geographical areas of the continental United States.

On April 6, the Chicago, New Orleans, Boston and Seattle took off from Sand Point on Lake Washington on the first leg of their long flight. The Seattle, surrounded by fog, crashed on April 30 on an Alaskan mountainside. After walking 10 days through the frozen wilderness, the two-man crew safely reached Dutch Harbor. The other three DWCs continued on and were kept flying with the help of 15 extra engines, 14 extra sets of floats and duplicates of all airframe parts, stashed at various sites around the world.

On June 26, they reached Calcutta, India, where the floats were replaced with wheels. The DWCs departed the Orkney islands in Scotland on July 30, again as seaplanes. On Aug. 3, with nearly three-quarters of the flight completed, the Boston made a forced landing in the mid-Atlantic. The crew was rescued and reunited with the Chicago and New Orleans on Sept. 3 in Nova Scotia, Canada. Two days later, the prototype DWC, now named Boston II, joined the group in Newfoundland so that its original crew could complete the flight.

On Sept. 28, as landplanes, they returned to Seattle. They had logged 27,553 miles (44,342 kilometers) in six months and six days, with an actual flying time of 371 hours. They had touched down in 28 countries and had crossed the Atlantic and Pacific Oceans. The flight was the greatest feat in aviation up to that time and earned the Douglas Aircraft Co. its motto, "First Around the World." 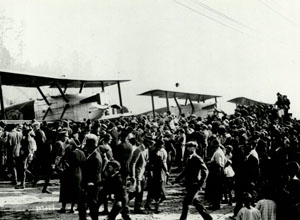