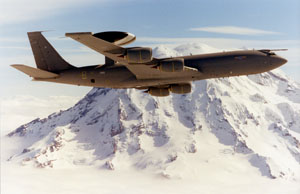 The E-3 Airborne Warning and Control System (AWACS) was first carried aboard militarized 707 commercial aircraft with a rotating radome mounted above the fuselage carrying the airplane’s avionics and radar. It has a 360-degree view of an area and at operating altitudes can detect, identify and display hostile aircraft and friendly aircraft in the same airspace more than 200 miles (322 kilometers) away.

The first E-3 entered U.S Air Force service in 1977, preceded by more than 10 years of competitive fly-offs, prototype design and development. Thirty-four U.S. AWACS aircraft were delivered to the Air Force, the last in 1984.

By 1994, 68 707 AWACS aircraft were in service worldwide with the United States, NATO, Saudi Arabia, France and the United Kingdom. E-3 AWACS provided airborne surveillance and command and control functions over Afghanistan during Operation Enduring Freedom in 2001.

Throughout its history, the AWACS fleet has undergone extensive enhancements, including upgrades to radar, computing, satellite communications and air traffic management. In 2014, Boeing received a contract from NATO to install digital flight decks and avionics on 13 of the alliance’s AWACS aircraft based on the Boeing 707.

In December 1991, Boeing announced it would offer a modified 767 commercial jetliner as the platform for the system. The first of the 767 AWACS, designated E-767, made its first flight Aug. 9, 1996, and the government of Japan ordered the first four 767 AWACS.

In February 1997, Boeing announced that it would offer a 737-700 as the platform for an airborne early warning and control (AEW&C) system with a variety of aircraft control and advanced radar systems for the Royal Australian Air Force (RAAF). Named “Wedgetail” in honor of Australia’s native eagle, the 737 AEW&C platform would be completely interoperable with the E-3 and 767 AWACS aircraft. Joining Boeing and Boeing Australia Ltd. on the Wedgetail team were Northrop Grumman Electronic Sensors and Systems Division and British Aerospace Australia.

The AEW&C had a different look. Instead of the rotating, circular radome, its multimode electronically scanned array (MESA) radar was enclosed in a fuselage-mounted structure nicknamed “top hat” for its shape. The 737 AEW&C aircraft is designed to provide airborne battle management capability, with its advanced multirole electronically scanned radar and 10 state-of-the-art mission crew consoles that can track airborne and maritime targets.