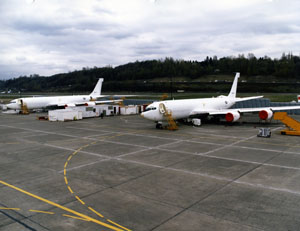 Assembled on the same production line as the E-3 Sentry Airborne Warning and Control System (AWACS) aircraft, was the E-6 Mercury, TACAMO ("Take Charge and Move Out") aircraft, also based on the Boeing 707 airframe.

The U.S. Navy awarded Boeing a full-scale development contract for the E-6A in 1983, and the prototype E-6A rolled out from the Renton, Wash., factory in December 1986.

Boeing delivered a total of 16 E-6 "survivable airborne communication system" airplanes to the Navy from 1989 to 1992.

The TACAMO airplanes support the Navy's ballistic missile submarine force, providing a vital link to the force from national command authorities. The TACAMO E-6B airplanes are equipped with dual trailing wires that serve as transmitter and antenna, transmitting in the very low frequency spectrum.