The North American Aviation F-100 Super Sabre was a sleek, swept-back-wing fighter that gave the United States a supersonic Air Force. Although the first version was produced prior to 1950, various improved versions served as trainers and as active military craft at many U.S. and foreign bases.

Since May 1953, when the first prototype model, the YF-100, bettered the speed of sound on its first flight, the versatile fighter set numerous records for speed, endurance, range and maintenance.

Late production models of the F-100D and F-100F had the capability of being launched from remote areas in the manner of manned missiles. An F-100D Super Sabre became the first supersonic aircraft to be “boosted” airborne without use of a runway in successful Zero Length Launch (ZEL) tests at Edwards Air Force Base, Calif., in 1958.

In addition to its nuclear bomb armament and four 20 mm cannons, the Super Sabre could be equipped to fire rockets and missiles, including the heat-seeking GAR-8 Sidewinder.

To demonstrate the ability of its pilots and aircraft, the Air Force chose F-100 Super Sabres to perform throughout the world in aerial precision demonstration flights. The famed “Thunderbirds,” a four-man aircraft team, were viewed by over 19 million people as the storied pilots performed intricate precision maneuvers at low altitude. In Europe the “Skyblazers” flew similar demonstrations.

In addition to the thin, highly swept wing and tail, the F-100 design incorporated other features that reflect an answer to the problem of supersonic flight. Heat-resisting titanium was used extensively throughout the plane. A low-drag, ultra-streamlined fuselage and canopy with but one thin-lipped air intake duct helped make supersonic speed possible. The canopy line matched the rear fuselage in a smoothly curving line so that from the side, the Super Sabre appeared to be slightly arched. Other features included automatic leading-edge slats and a low-positioned one-piece horizontal stabilizer. The F-100 was the first USAF airplane to utilize the low tail.

The plane had an automatically regulated air conditioning and pressurizing system and automatic fuel system.

Particular attention was given to placement of all controls, equipment and instruments in the cockpit for ease of operation. 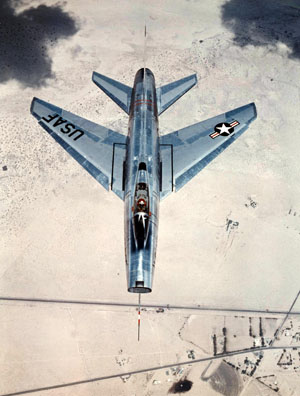