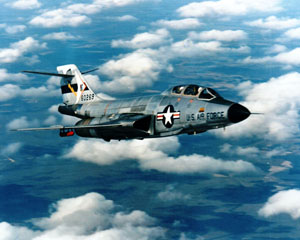 McDonnell Aircraft’s Voodoo was a supersonic fighter, bomber escort, all-weather interceptor and photoreconnaissance aircraft. It served during the Cuban Missile Crisis and during the Vietnam War.

It began as the XF-88 all-weather interceptor (fighter) and first flew at Muroc Dry Lake Air Base, Calif., in 1948. The XF-88 Voodoo had thin wing and tail surfaces designed to literally slice through the air and reduce drag to an absolute minimum. The wings were swept back sharply at a 35-degree angle to reduce compressibility effects. Only two XF-88 Voodoos were built; the U.S. Air Force canceled the project after the start of the Korean War.

In 1952, McDonnell received a development contract for the F-101 Voodoo, based on the XF-88. F-101s were designed as long-range twinjet fighters to escort bombers, attack distant targets and provide close support for ground troops.

The new fighter jet kept some of the supersonic aerodynamic characteristics of the XF-88, such as the wing area and wing platform, tail platform, and side-by-side arrangements of the engines. However, the F-101 wings were thinner, the size and location of the tail were altered, and the engines were moved forward in a larger fuselage.

The F-101 set several new speed records. In Operation Sun Run on Nov. 27, 1957, RF-101As set a transcontinental speed record by racing from Los Angeles, Calif., to New York and back to Los Angeles in 6 hours, 46 minutes—flying faster than the sun.

During the Cuban Missile Crisis RF-101s flew 82 missions over Cuba, flying low to avoid fire from Soviet surface-to-air missiles. One RF-101 pilot claimed he flew so low that a Soviet technician almost hit his Voodoo with a volleyball.

Thanks to the Voodoo's reconnaissance flights, the United States could confirm that the Cuban nuclear sites were being dismantled. In recognizing the achievements of the 363rd Tactical Reconnaissance Wing pilots who made those flights, President John F. Kennedy said, "You gentlemen have contributed as much to the security of the United States as any group of men in our history."