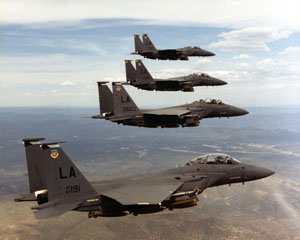 McDonnell Aircraft formalized the concept for the F-15 in 1967 when the company was selected to enter the second phase of the U.S Air Force's FX competition. Competing against Fairchild Hiller and North American Rockwell, McDonnell used lessons learned during the Vietnam War on the changing nature of jet age air-to-air combat, given that the F-4 Phantom II was earning its reputation as a formidable fighter. On Dec. 23, 1969, after more than two years of intensive testing and evaluation, the Air Force awarded McDonnell Douglas the F-15 Advanced Tactical Fighter contract. The McDonnell Douglas team had placed first among the three competitors in all phases of the competition and had the lowest contract price.

The F-15 is a twin-engine, high-performance, all-weather air superiority fighter known for its incredible acceleration and maneuverability. With a top speed in excess of Mach 2.5 (more than 1,600 mph or 2575 kph), it was the first U.S. fighter with enough thrust to accelerate vertically. The F-15 carries a large complement of missiles — including AIM-9 Sidewinders and AIM-7 Sparrows; the Boeing-built Small Diameter Bomb I, Joint Direct Attack Munition (JDAM) and Laser JDAM weapons; and an internal 20 mm Gatling gun — all vital for modern engagements.

In early 1975, flying out of Grand Forks Air Force Base in North Dakota, an F-15A known as Streak Eagle set many time-to-climb world records. Between Jan. 16 and Feb. 1, 1975, the Streak Eagle broke eight time-to-climb world records. It reached an altitude of 98,425 feet just 3 minutes, 27.8 seconds from brake release at takeoff and coasted to nearly 103,000 feet before descending.

Eagles flown by Israel's air force were the first to face a true adversary in the air. They downed more than 50 Syrian fighters with no losses of their own. In service with the U.S. Air Force, the F-15 Eagle downed MiG fighters during the Balkan conflict and the majority of Iraq's fixed-wing aircraft during Operation Desert Storm.

To meet the U.S. Air Force requirement for air-to-ground missions, the F-15E Strike Eagle was developed. It made its first flight from St. Louis in December 1986. The Strike Eagle can carry 23,000 pounds of air-to-ground and air-to-air weapons and is equipped with an advanced navigation and an infrared targeting system, protecting the Strike Eagle from enemy defenses. This allows the Strike Eagle to fly at a low altitude while maintaining a high-speed, even during bad weather or at night.

The F-15 has been produced in single-seat A model and two-seat B versions. The two-seat F-15E Strike Eagle version is a dual-role fighter that can engage both ground and air targets.

Boeing has continued to evolve the F-15 with advanced technology, and it is undefeated in air-to-air combat — 101 aerial victories and 0 defeats. Production continues today with advanced models for several international customers.

In all models, more than 1,500 F-15s have been built. F-15 will be a major player in the U.S. Air Force air superiority and dominance arsenal through the 2040 timeframe using leading-edge technology and capabilities that will keep the Advanced F-15 and its mission systems current.