Designed to preserve air dominance, the F-22 Raptor is known for its stealth, agility and lethality, with the ability to target air and ground-based threats.

The F-22 Raptor is one of the newest fighters in the U.S. Air Force fleet. It offers a combination of stealth, speed, maneuverability, and robust warfighting capabilities. A suite of sensors and highly-lethal weapons guarantee air dominance, supporting the mission at hand.

Boeing partners with Lockheed Martin to design and install modernization upgrades for the F-22 Raptor, allowing U.S. Air Force pilots to maintain air superiority and stay ahead of potential threats. In addition to performance-based logistics support on several F-22 components, Boeing also provides pilot and maintainer training, with onsite support, to ensure mission-readiness around the clock. 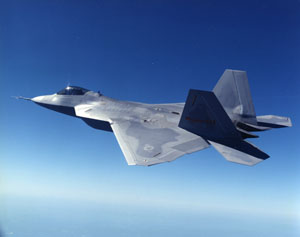 In the mid-1990s, Boeing teamed with Lockheed Martin to develop and build the F-22, an extremely advanced tactical fighter that combined stealth, integrated avionics and maneuverability. The F-22 was intended as replacement for the F-15 as America's front-line dominance fighter.

The first production F-22 was unveiled April 9, 1997, at a rollout ceremony hosted by Lockheed Martin, Boeing and Pratt & Whitney. It was the first of nine flyable F-22s built for flight testing.

Lockheed Martin Aeronautical Systems, a division of Lockheed Martin Corp., based in Marietta, Ga., was responsible for program management; the integrated forebody (nose section) and forward fuselage, including the cockpit and inlets; the wing leading edge; the fins and stabilators, flaps, ailerons and landing gear; and final assembly of the aircraft. Lockheed Martin Tactical Aircraft Systems, based in Fort Worth, Texas, was responsible for the center fuselage; stores management; integrated navigation and electronic warfare systems; the communications, navigation, and identification system; and the weapon support system. Boeing in Seattle, Wash., built the wings and aft fuselage, including the structures necessary for engine and nozzle installation, and was responsible for avionics integration, 70 percent of mission software, the training system, the life support and fire protection systems, and the pilot and maintenance training systems.

In 2002, Boeing delivered the 2,000-pound (907-kilogram) titanium and composite wings for the first F-22 production aircraft. By April 2005, Boeing had delivered 61 sets of wings and 66 aft fuselages as well as a number of integrated avionics flight-test packages and updates to Lockheed Martin.

The F-22 entered service in 2005, and it won the prestigious Collier Trophy for 2006, but in the years to come it was surrounded by controversy about costs and its suitability in a post–Cold War environment. After the collapse of the Soviet Union, the next generation of Soviet fighters the aircraft had been intended to dominate in aerial combat never materialized. The U.S. Department of Defense announced the decision to end F-22 production at 187 aircraft in April 2009. The Air Force received the last F-22 in 2012.

In September 2014, the F-22 Raptor made its combat debut in coordinated strikes with other fighter jets and bombers against Islamic State (ISIS) strongholds in Syria.