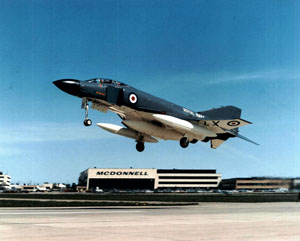 The McDonnell two-place, twinjet, all-weather F-4 Phantom II, with top speeds more than twice that of sound, was one of the most versatile fighters ever built. It served in the first line of more Western air forces than any other jet. Just 31 months after its first flight, the F-4 was the U.S. Navy's fastest, highest flying and longest range fighter. It first flew May 27, 1958, and entered service in 1961.

The aircraft was named Phantom II on July 3, 1959, during a ceremony held at the McDonnell plant in St. Louis, Mo., to celebrate the company's 20th anniversary. It remained in production until the company's 40th anniversary. By then, the numeral "II" had been discontinued; it had become the only Phantom.

Modifications incorporated improvements to weapons, avionics, radar and engines. The RF versions were equipped with cameras and surveillance gear for aerial reconnaissance. Armament ranged from cannons to missiles.

F-4s saw combat in both the Vietnam War and Operation Desert Storm and served with the air forces of 11 countries in addition to the United States. Both U.S. military flight demonstration teams, the Navy Blue Angels and the Air Force Thunderbirds, flew the Phantom II from 1969 to 1973.

The 5,000th Phantom was delivered on May 24, 1978, in ceremonies that also marked the 20th anniversary of the fighter's first flight, and McDonnell Douglas delivered the last St. Louis–built Phantom II in October 1979. By 1998, approximately 800 were still in service around the world.

In 2014, modified Phantoms designated QF-4 were being used as remotely controlled aerial targets over the Gulf of Mexico to test pilots, aircraft such as drones and weapons at Tyndall Air Force Base near Panama City, Fla. In September 2014, the first unmanned QF-16 Viper was successfully tested there as a proposed replacement for the aging QF-4s.