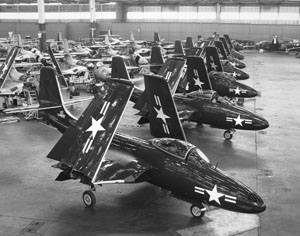 The McDonnell F2H Banshee fighter, immortalized by James Michener in his novel, The Bridges of Toko-Ri, was similar in design and appearance to the FH-1 Phantom, but it had twice the power and carried bombs as well as rockets and cannons. McDonnell Aircraft Corp. built 895 Banshees, and they established the company as a new star in the U.S. aircraft manufacturing industry.

The Banshee was a multimission aircraft used as a day fighter, as a night fighter and for photoreconnaissance; a variant was specially strengthened to carry nuclear weapons. It went into combat in 1951 and served as one of the principal fighters with the Navy's Seventh Fleet for the duration of the Korean War.

The F2H-3 fuselages were 8 feet (2.4 meters) longer than the F2H-2s and accommodated radar equipment and an extra 1,102 gallons (4171 liters) of gas. Some were fitted for aerial refueling. Banshees became the U.S. Navy's standard aircraft for all-weather fighter missions of extended range and remained in service until September 1959. In November 1955, 39 former U.S. Navy F2H-3s were transferred to the Canadian Navy, the last of which were retired from service in September 1962. .