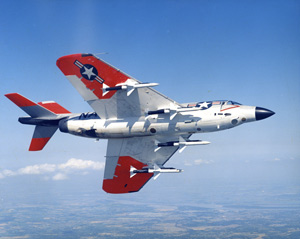 The F3H Demon (later designated the F-3) was the first swept-wing jet fighter designed by McDonnell Aircraft and the only single-engine carrier-based fighter built by the company. Design began in 1949, with the XF3H-1 prototype making its first flight Aug. 7, 1951.

The plane’s original Westinghouse J40 engine proved to be so unreliable that, after the loss of six aircraft and four pilots, the first production F3H-1N Demons were permanently grounded. Even with the troubled engine, one F3H-1N Demon, flown by McDonnell test pilot Chet Braun, set an unofficial time-to-climb record in 1955 of 10,000 feet (3000 meters) in 71 seconds.

In 1953, the Demon was redesigned around the more powerful Allison J71 engine. The new engine greatly improved the plane’s performance, and in 1956 the F3H-2N Demon was fully qualified as a front-line fighter for the U.S. Navy.

The F3H-2M Demon, first flown in 1955, was the first U.S. combat aircraft designed to be armed primarily with missiles rather than guns. The F3H-2 Demon, first ordered in 1956, was designed as a strike fighter. It was armed with four Sparrow radar-guided missiles or two Sidewinder heat-seeking missiles and four 20 mm cannons. The F3H-2 could also carry up to 6,000 pounds (2722 kilograms) of conventional bombs.

In service, the Demon performed dependably and gained praise from pilots for its stable flying characteristics at high altitude as well as during carrier operations. In 1958, flying day and night, Demons provided all-weather fleet defense during crises over Quemoy Island near China in the Far East and Lebanon in the Mediterranean.

McDonnell Aircraft delivered the last of 522 Demons in 1959. The Demon remained in squadron service until 1964.