The McDonnell Douglas F/A-18 Hornet was designed for aircraft carrier duty and was the first tactical aircraft designed to carry out both air-to-air and air-to-ground missions. The U.S. Marines ordered it as an F-18 fighter and the Navy as an A-18 attack aircraft. It can switch roles easily and can also be adapted for photoreconnaissance and electronic countermeasure missions.

The F/A-18 Hornet was also the first aircraft to have carbon fiber wings and the first tactical jet fighter to use digital fly-by-wire flight controls. Variants included a two-seater, an improved fighter, a reconnaissance aircraft and a night-attack fighter.

Hornets entered active duty in January 1983. In 1986, Hornets on the USS Coral Sea flew their first combat missions. During the 1991 Persian Gulf War, while performing an air-to-ground mission, Hornets switched to fighter mode and destroyed two Iraqi MiG-21s in air-to-air combat, then switched back to attack mode and successfully completed their air-to-ground mission. During 2001, Hornets provided around-the-clock battlefield coverage in the Afghanistan Theater of operations.

The F/A-18E/F Super Hornet made its first flight in November 1995. The Super Hornet is a low-observable aircraft that performs multiple missions, including air superiority, day-and-night strike with precision-guided weapons, fighter escort, and close air support. It is operational in 10 U.S. Navy Carrier Air Wings (25 squadrons) and the Royal Australian Air Force.

The Super Hornet is produced in the single-seat E model and the two-seat F model. The F/A-18E/F is 25 percent larger than the original Hornet and has increased maneuverability, range, and payload, and more powerful engines. It entered operational service with the U.S. Navy in 1999, after Boeing had merged with McDonnell Douglas, won the Collier Trophy for that year and flew its first combat missions in 2002.

In 2008, the EA-18G Growler joined the Navy’s aircraft fleet. A Super Hornet derivative, the EA-18G provides tactical jamming and electronic protection for U.S. and allied forces, delivering full-spectrum airborne electronic attack capability along with the targeting and self-defense capabilities of the Super Hornet.

In August 2013, Boeing and Northrop Grumman began flight tests with a prototype of an Advanced Super Hornet aircraft with conformal fuel tanks, an enclosed weapons pod and signature enhancements. 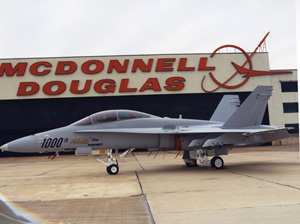