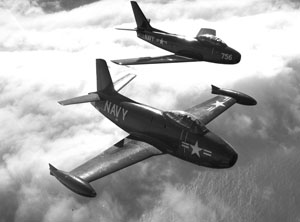 In 1944, to counter the growing threat of German jets, the U.S. military enlisted North American Aviation to develop a common jet-powered fighter plane to be used by both the Navy and the Army Air Force. The planes were designated XFJ-1 Fury for the Navy and XP-86 Sabre for the Air Force. At that time, the Navy used a different designation system that not only identified the mission of the airplane (F for "fighter") but also identified the manufacturer—“J” being the Navy code for North American, which was a holdover from one of NAA’s predecessor companies Berliner-Joyce. In 1962, when a common designation system was adopted for all U.S. military airplanes, the FJ series became the F-1.

The XFJ-1 was first to fly. The plane borrowed the wings and tail from the successful design of the P-51 Mustang but featured a fuselage where the pilot sat above the air intake, giving the airplane a rotund appearance.

While the XFJ-1 was being evaluated, captured German data on the swept wing arrived at North American and was applied to the XP-86, sending it on a divergent develop path and creating an airplane that would become a legend in the skies over Korea.

The Navy chose to stay with the straight-winged FJ-1 because of the low-speed handling necessary to land on its carriers that were built to operate World War II piston aircraft. Thirty FJ-1s were built, and in 1948 they became the first jets to operate in squadron strength from an aircraft carrier.

The FJ-1 was soon eclipsed by the McDonnell F2H Banshee and Grumman F9F Panther, and by 1949 they were transferred to the Navy reserve. When war broke out on the Korean peninsula in June 1950, it was not long before naval aviators flying Banshees and Panthers found themselves outclassed when they encountered the Soviet-built MiG-15 swept-wing fighter. The Navy once again turned to North American.

North American’s F-86 was able to match and defeat the MiG-15, and the company developed a version of the F-86E modified for carrier operations. It included a lengthened nose gear, folding wings, and an arrestor hook, plus the six .50 caliber machine guns were replaced with four 20 mm cannons. The Navy ordered 200 of the planes, designated FJ-2.

North American further modified the FJ-2 with a 7,700-pound-thrust (3492-kilogram-thrust) British Sapphire engine built under license by Curtiss-Wright. In March 1952, the Navy order 389 of these more powerful jets, designating them the FJ-3, and later, in March 1954, added an order for 149 more. The first production FJ-3 flew from North American Aviation’s Columbus, Ohio, plant on Dec. 11, 1953.

At that time, North American Aviation's engineers in Columbus were working on an all new Fury, known as the FJ-4, with the first one flying Oct. 28, 1954.

The FJ-4 “Fury Four” was a major redesign with a new fuselage, thinner wider area wings, thinner tail surfaces and a 50 percent increase in internal fuel capacity. The Navy ordered 152 FJ-4s and then placed an order for 222 of the follow-on FJ-4B. The FJ-4B, the last of the Furies, featured a strengthened wing with six hard points, which added a low-level ground attack capability to the fighter.

The FJ-4 went on its last operational cruise on board the carrier CV-16 Lexington in 1962 and continued in reserve squadrons well into the 1960s. In all, Columbus delivered 1,112 Furies to the U.S. Navy and Marine Corps, making the Fury a very successful program—especially in a market with tremendous competition, going up against companies that were synonymous with carrier aviation such as Douglas, Chance Vought, Grumman and McDonnell. The Fury had done its job of introducing high-performance swept-wing jets to carrier aviation and paved the way for supersonic jets such as the F-4 Phantom.