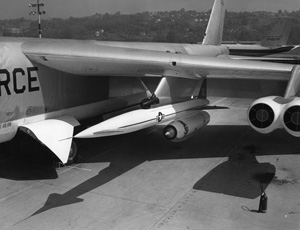 The Hound Dog, originally designated B-77, was redesignated GAM-77 and then became the AGM-28. North American Aviation designed the missile so that two could be carried on specially modified B-52s, one beneath each wing. The navigation systems of the B-52 and the GAM-77 were integrated so that the B-52 navigator could cross-check data with the automated system in the Hound Dogs.

Named after a hit song by Elvis Presley, the AGM-28 Hound Dogs were air-launched supersonic missiles designed to destroy heavily defended ground targets. The Hound Dog missile program began on March 15, 1956, when the U.S. Air Force issued a requirement for an air-to-surface missile to be carried on the B-52 bomber. North American won the contract on Oct. 16, 1958, and delivered the first production model to Gen. Thomas S. Power, commander in chief of the Strategic Air Command (SAC), on Dec. 21, 1959, in a ceremony at North American's Downey, Calif., plant.

The first launch of the missile from a B-52 took place in April 1959. By the end of 1959, the Air Force had approved 29 B-52 squadrons to be equipped with Hound Dog missiles.

No AGM-28s were ever used in combat, but on a typical mission, an AGM-28 would be launched at an altitude of 45,000 feet (13,700 meters), climb to more than 56,000 feet (17,068 meters), cruise to the target area and then dive to the target. The missile allowed standoff launches hundreds of miles from the target, reducing risk to the launch aircraft.

In 1960, the SAC developed a method for using the missiles’ jet engines to provide extra power for the B-52 carrier in flight or during takeoff. The missiles could then be refueled in flight from the bomber's fuel tanks.

The AGM-28B, incorporating an improved guidance system and with greater range, first flew in May 1961. Before production ended in 1963, almost 700 AGM-28s were built. The last AGM-28s were removed from service in 1975 and scrapped three years later.