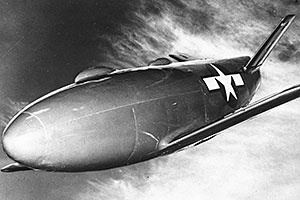 In 1944, McDonnell won the contract to build the radio-controlled, rocket-propelled, air-to-surface Gargoyle missile for the U.S. Navy. The missile was intended to counter German-guided anti-ship glide bombs from carrier-based aircraft. The LBD-1 Gargoyle glide bomb was to be equipped with a 1,000-pound (454-kilogram) armor-piercing warhead.

The Gargoyle's Aerojet solid-propellant rocket booster allowed it to reach a high diving speed. A bright flare in its tail allowed operators to monitor its progress and correct its trajectory by radio. It was 10 feet, 2 inches (3.1 meters) long by 1 foot, 8 inches (0.5 meters) in diameter, with an 8-foot, 6-inch (2.6-meter) wingspan.

Glide tests of the LBD-1 began in March 1945, followed by the first-powered flights in July. The Gargoyle was redesignated as a KSD-1 anti-shipping missile in 1945, but World War II ended before it was deployed. It then became a research vehicle and designated KUD-1, which first flew in July 1946.

McDonnell produced 250 Gargoyles before production ended in mid-1947. The remaining missiles, redesignated as RTV-2 in September 1947 and RTV-N-2 in early 1948, were used to test components for other guided-missile programs. In December 1950, the program was officially terminated and surviving missiles were scrapped.