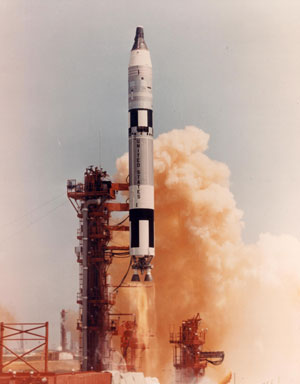 NASA selected McDonnell to build the Gemini capsule in 1961, and it was delivered less than two years later. McDonnell also delivered the Agena target vehicle docking adapters and mission and docking simulators. Final splashdown of Gemini XII was Nov. 15, 1966.

The two-person Gemini spacecraft had nearly twice the room of the Mercury and included many technological improvements. Experience showed that much equipment could be placed outside the pressurized cabin and left behind at re-entry. Gemini propulsion systems allowed changes in orbit as well as re-entry maneuvers for pinpoint landings.

Gemini showed how astronauts could endure long-duration weightlessness and how they could maneuver in orbit, rendezvous and dock with another vehicle. Gemini established many records, including the longest duration flight of 330 hours, 35 minutes, 17 seconds set by Gemini VII; the first rendezvous of two maneuverable spacecraft, Gemini VI and Gemini VII; and the first docking of two orbiting spacecraft with Gemini VIII and Agena VIII.