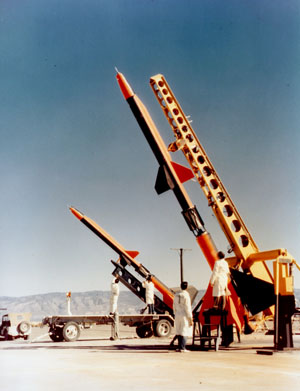 Immediately after World War II, the GAPA (for “Ground-to-Air Pilotless Aircraft”) was the first Boeing missile and pioneered the company’s efforts in rocket-propulsion technology. GAPA was a slim, two-stage missile that traveled at supersonic speeds.

Its mission was to intercept aircraft flying up to 700 mph (1126 kph) at altitudes of 8,000 feet (2438 meters) to 60,000 feet (18,288 meters). GAPA was tested using both solid- and liquid-fuel rockets as well as ramjet propulsion systems. The first flights used early radar guidance systems. Later versions had a target seeker and used solid-fuel rockets in combination with ramjet power.

Nov. 15, 1949, a GAPA reached 59,000 feet (17,983 meters), the highest altitude for a supersonic ramjet of the time. Although it was never used as a defensive weapon, GAPA provided the basis for Bomarc missiles.