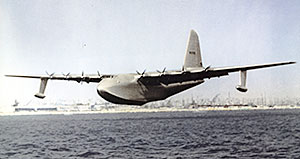 The single 400,000-pound (181,436-kilogram) H-4 Hercules flying boat, built by the Hughes Aircraft Co., was the largest flying boat ever built with the widest wingspan. It was built after a U.S. government request in 1942 for a cargo and troop carrier that would not be susceptible to Axis submarines and, by substituting wood for metal in its construction, would not use critical wartime materials.

Originally conceived by Henry J. Kaiser, a steelmaker and builder of Liberty ships, the aircraft was designed and constructed by Howard Hughes and his staff; hence, the original HK-1 Hercules (NX37602) designation. Kaiser withdrew his support in 1944 because Allied aircraft needs shifted toward bombers and the type of aircraft was no longer needed.

Hughes continued to develop the aircraft under the H-4 designation. The press nicknamed it the "Spruce Goose" — a name Hughes hated because it insulted its builders and, in fact, the plane was built almost entirely of laminated birch, not spruce.

The cargo-type flying boat was designed to carry 750 fully equipped troops or two Sherman tanks over long distances. It has a single hull, eight radial engines, a single vertical tail, fixed wingtip floats, and full cantilever wing and tail surfaces. The entire airframe and surface structures are composed of laminated wood and all primary control surfaces, except the flaps, are fabric covered. The aircraft's hull includes a flight deck for the operating crew and a large cargo hold. A circular stairway connects the two compartments. Fuel bays, divided by watertight bulkheads, are below the cargo hold.

By 1947, the U.S. government had spent $22 million on the H-4 and Hughes had spent $18 million of his own money. Finally, on Nov. 2, 1947, Howard Hughes and a small engineering crew fired up the eight radial engines for taxi tests. Hughes lifted the giant aircraft 33 feet (10 meters) off the surface of Long Beach (Calif.) Harbor and flew it for 1 mile (1.6 kilometers), for less than a minute, remaining airborne 70 feet (21 meters) off the water at a speed of 80 mph (128 kph) before landing.

The H-4 Hercules never flew again. Until he died in 1976, Hughes made sure that the HK-1/H-4 was constantly maintained and kept in flight-ready condition. The "Spruce Goose" then found a home with the Aero Club of Southern California, preserved in its own circular building, next to the former ocean liner Queen Mary, at Long Beach, Calif. In 1988, The Walt Disney Co. acquired the location, and Disney's plans for the site did not include the "Spruce Goose." Facing loss of its lease, the Aero Club sold the giant plane to the Evergreen Aviation Museum (now the Evergreen Aviation & Space Museum) in 1993, which disassembled the aircraft and moved it by barge to its current home in McMinnville, Ore.

By the mid-1990s, the former Hughes Aircraft buildings in Los Angeles, Calif., including building 15 where the "Spruce Goose" was built, had been converted into movie sound stages. Scenes from movies such as "The Aviator", "Titanic", "Avatar", "Eagle Eye" and "Transformers" have been filmed on location in the 315,000-square-foot airplane hangar where Howard Hughes created the legendary flying boat and other famous Hughes aircraft.

Google now leases the four-building property, and officially moved into the hangar — which has since been transformed into creative office space — in late 2018.