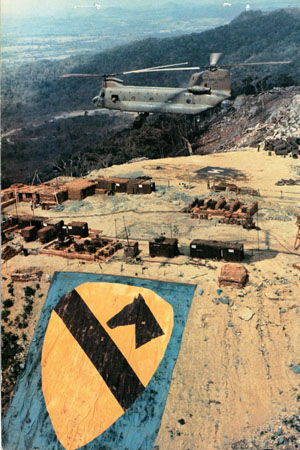 In 1960, Boeing bought Vertol Aircraft Co., a helicopter manufacturer in Philadelphia, Pa. The company had three tandem-rotor helicopters under production: the Chinook for the U.S. Army, the Sea Knight for the U.S. Navy and Marines, and the commercial 107-II for the airlines.

Vertol had started out as the P-V Engineering Forum, owned by Frank Piasecki, which established the "banana shaped" two-rotor helicopter in 1945. Shortly thereafter, the company was renamed Piasecki Helicopter Corp. Piasecki left the corporation in 1955, and it was renamed Vertol the following year.

The first in the long line of Chinooks was the YHC-1B tandem-rotor transport helicopter that rolled out in 1961. It was designed to serve the U.S. Army and Air Force as a medium-lift helicopter and evolved into several versions.

Chinooks were first used in combat in 1965 during the Vietnam conflict. During the last days of the war, one Chinook is reported to have carried 147 refugees in a single lift. CH-47A, B and C models served with until the war's end in 1975.

After the Vietnam War, Boeing and the Army began a major fleet upgrade that led to development of the CH-47D. Almost 500 early model Chinooks went through an extensive modernization process in Philadelphia that produced an essentially new H-47 fleet. The CH-47D Chinook was a central element in U.S. Army operations in the Persian Gulf War. Versions of the D model were also used for export including the “International Chinook” and the SD “Super D,” in all 20 nations have operated various models of the H-47.

The Army Special Operations Command MH-47G combines many proven Chinook systems and features. Notable among these are fuel tanks providing twice the capacity of the CH-47F and an in-flight refueling system. MH-47Gs are remanufactured on the common MH-47G/CH-47F production line.

In 2014, Boeing said that ongoing CH-47F/MH-47G modernization programs, which include a mix of remanufactured and new aircraft, would ensure that this tandem rotor helicopter remains in the Army fleet through at least the 2030s. Chinooks have served the armed forces of more than 19 international customers and performed in commercial service around the world.