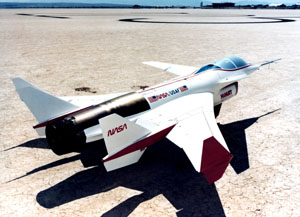 Rockwell, the prime contractor, developed and built two HiMAT aircraft and delivered them to NASA, who performed the first flight in July 1979. The HiMAT program represented a $17 million investment in application of advanced technology by NASA and the Air Force Flight Dynamics Laboratory. The flight test program was carried out at NASA's Hugh L. Dryden Flight Research Center, in Edwards, Calif.

HiMAT was launched from a B-52 at about 45,000 feet (13,716 meters). Unmanned, HiMAT was controlled by a NASA test pilot from the ground facility. The ground cockpit contained the normal flight controls — throttle, stick, rudder pedals and sensor displays. A computer converted the pilot's actions into electronic signals telemetered to the craft, where an onboard computer sent signals through the digital fly-by-wire system to the flight control surfaces. Telemetry equipment aboard HiMAT relayed thousands of bits per second of real-time flight data back to ground computers. The flight duration allowed multitask research missions to be performed. Landings on the dry desert lakebed were made on skid-type landing gear similar to that used by the record-setting Rockwell X-15 rocket-powered research airplane.

The craft was capable of speeds of more than 1-1/2 times that of sound. HiMAT was designed to demonstrate maneuvering performance 60 percent better than advanced fighters. The main emphasis during flight testing was on high-G maneuvers in the transonic flight regime (600 to 800 mph, or 965 to 1287 kph), where superior performance is the most difficult and significant.