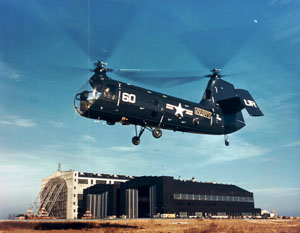 The HUP-1 Retriever was a tandem-rotor, single-engine rescue and utility helicopter built by Piasecki Helicopter Corp., predecessor to Vertol Aircraft Corp., which was purchased by Boeing in March 1960.

The rugged HUP was built to higher load factors than previous helicopters in the United States and was the first helicopter to perform a loop, although unintentionally, when demonstrating its "g" capabilities. The HUP-2 was the first production helicopter to be equipped with an autopilot, which enabled hands-off flying, including hovering.

Frank Piasecki designed the HUP-1 to meet a 1945 Bureau of Aeronautics requirement for a utility helicopter based on U.S. Navy aircraft carriers for search and rescue, plane guard and general transportation duties. The proposed aircraft was given the working designation PV-14, and two XHJP-1 prototypes were completed for Navy evaluation.

The overlapped tandem design provided a compact fuselage and rotor system so that the HUP-1 could go down any aircraft carrier elevator without folding its blades. Its fuselage was an all-metal, semi-monocoque construction with conventional fixed landing gear. The cockpit had side-by-side seating with dual controls. The cabin contained about 160 cubic feet (48 cubic meters) of space for passengers or cargo.

The copilot's seat folded forward and an electrically operated hatch door lowered to drop a rescue sling from an overhead hoist for a live rescue without crew assistance; the hydraulic hoist could lift up to 400 pounds (181 kilograms). A litter could be lifted directly into the cabin. For easier maintenance, the engine, its mount, fan cowling, oil system and accessories could be removed as one unit through an overhead hatch in the rear fuselage.

The two three-bladed rotors, which overlapped for maximum compactness and maximum lifting efficiency, were driven through two transmissions and were counter-rotated to eliminate torque.

In 1948, work began on 32 PV-18s, or HUP-1 Retrievers. The major change was the addition of inward sloping endplate fins to the horizontal stabilizers below the rear rotor head. Successful tests with a Sperry autopilot in the XHJP-1 allowed the next model, the HUP-2, which first flew in 1948, to be built without tail surfaces. The HUP-2, and all subsequent production models, used the more powerful Continental R-975-42 engine.

The HUP-2 entered service with the U.S. Navy and Marine Corps in 1949. Variants with the Navy included 12 HUP-2S submarine-hunting aircraft with dunking sonar equipment and an HUP-2 with a sealed, watertight hull and outrigger twin floats for waterborne tests.

In 1951, the U.S. Air Force, on behalf of the U.S. Army, ordered a version of the HUP-2 for general support and evacuation work that had a reinforced cabin floor and hydraulically boosted controls. Seventy of these were delivered as H-25A Army Mules as were 50 similar Navy HUP-3s, including three for the Royal Canadian Navy, for ambulance and light cargo duties.

A total of 339 HUP-1/2/3/4/H-25 helicopters went to the U.S. Army and Navy, the Royal Canadian Navy and the French Navy. Over their 20 years of service life, these helicopters were responsible for saving countless lives. The last HUP left the production line in July 1954. It continued to serve with the French Navy until 1965.