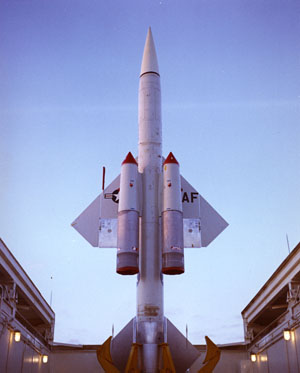 The supersonic Bomarc missiles (IM-99A and IM-99B) were the world’s first long-range anti-aircraft missiles and the first missiles that Boeing mass-produced. Boeing also designed and built the launch facilities. This ambitious program established Boeing as a leader in large-scale systems integration.

In 1949, because of the Soviet Union’s nuclear weapons program and its long-range bombers that could reach the United States, the U.S. Air Force authorized Boeing to proceed with research into a new supersonic anti-aircraft missile. Two months after the go-ahead, the Michigan Aeronautical Research Center (MARC) was added to the research project — which was then labeled “Bomarc,” combining the names Boeing and MARC.

In January 1951, Boeing was awarded a contract to develop the missile, which was given the designation XF-99. At that time, these missiles were considered pilotless aircraft, since their mission was to intercept enemy bombers, and they were given an “F,” for “fighter,” designation. Later, the Air Force refined its designation system, and the Bomarc became the IM-99 (interception missile). The first of the XF-99 research missiles flew on Sept. 10, 1952.

The first production model of the Bomarc was the IM-99A, which first flew on Feb. 24, 1955. The IM-99A was powered by an Aerojet General liquid-fueled rocket motor that boosted the missile to near supersonic speed. At that speed, twin Marquardt ramjet engines, attached by pylons to the underside of the missile, propelled the missile to its target at Mach 2.5 to a range of 250 miles (400 kilometers).

One major issue with the early Bomarc was the main booster’s highly corrosive liquid rocket fuel. This fuel could not be stored on board the missile and had to be loaded before launch, a process that added nearly two minutes to the missile’s launch time.

The solution was to replace the liquid-fueled motor with a large solid-fuel booster. The result was the much safer and better-performing IM-99B Super Bomarc, which had a response time of less than 30 seconds. The B model had increased range of 440 miles (710 kilometers). While its stated cruise speed was Mach 2.5, the B model had been tested to speeds of Mach 4 and was effective from sea level to 100,000 feet (30,480 meters).

Between 1957 and 1964, Boeing built 570 production missiles (269 production IM-99As and 301 production IM-99B missiles) and another 130 for various tests. The missiles were housed on a constant combat-ready basis in individual launch shelters in remote areas. They used analog computers, some of which were built by Boeing and had been developed for ground-to-air pilotless aircraft (GAPA) experiments during World War II.

Bomarc was integrated into the centralized command-and-control air-defense system for Canada and the United States, known as SAGE (semi-automatic ground environment). The system would guide the Bomarc to incoming targets until the missile’s own seeker could lock on to a target and detonate the missile’s warhead at the closest point of pass or on impact.

Bomarc was a successful program that met all of its original objectives, but the nature of the nuclear threat changed from primarily bombers to ballistic missiles. In 1970, Congress declared that a continental U.S. air defense missile system was no longer necessary, and on Oct. 1, 1972, the last Bomarc was retired from service.