The Boeing-developed Inertial Upper Stage (IUS), an unpiloted, upper-stage booster rocket, could be launched from the Titan 34D or Titan IV expendable launch vehicles or from the Space Shuttle.

In 1989, the IUS sent the Magellan and Galileo spacecraft to Venus and Jupiter, respectively. In 1990 it sent the Ulysses spacecraft to the sun. On Aug. 6, 2001, an IUS successfully deployed a Defense Support Program satellite for the U.S. Air Force from Cape Canaveral Air Force Station, Fla.

A typical Boeing IUS mission launched from a Titan IVB involved IUS separation from the rocket’s second-stage booster approximately nine minutes into flight. The IUS took over responsibility for the remainder of the powered portion of the flight. For the next six hours and 54 minutes, the IUS autonomously performed all functions to place the spacecraft into its proper orbit, some 22,000 miles (35,405 kilometers) above the Earth. The first IUS rocket burn occurred a little over one hour into the IUS booster flight. The IUS second solid rocket motor ignited about six-and-a-half hours into the flight, followed by a coast phase, and then, separation of the spacecraft.

The Boeing IUS was launched on its final mission, Feb. 14, 2004, when it successfully deployed a U.S. Air Force Defense Support Program (DSP) satellite. The IUS-10 and its integrated payload, DSP-22, were launched aboard a Titan IVB rocket, which also flew with a Boeing-made fairing. Liftoff occurred from Space Launch Complex 40 at Cape Canaveral Air Force Station.

On separation from the rocket, IUS-10 fired its two stages to propel the spacecraft toward its geosynchronous orbit. Following roll maneuvers, the IUS successfully deployed the spacecraft. “This last IUS mission added a critical asset to our nation’s military space program with the successful launch of DSP-22,” said Bill Benshoof, Boeing IUS program manager. “The flight of IUS-10 concludes a 22-year journey for one of the most successful upper stages ever built and flown.” 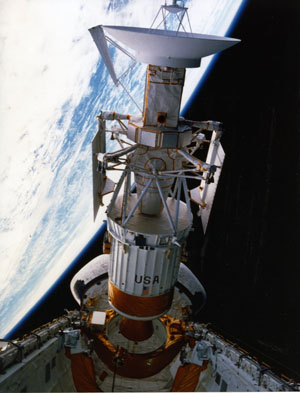