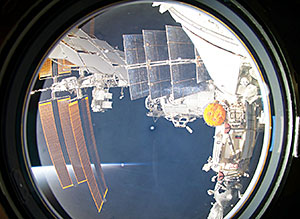 In August 1993, NASA selected Boeing as prime contractor for the International Space Station (ISS), a permanent orbiting laboratory in space and the largest international space venture ever undertaken. With a "space footprint" the size of two football fields, the space station averages an altitude of 220 statute miles (354 kilometers).

As the prime contractor, Boeing was responsible for design, development, construction and integration of the ISS and for assisting NASA in operating the orbital outpost. Boeing built all of the major U.S. elements. The company also prepared every ISS U.S. component for space flight at the Space Station Processing Facility at Kennedy Space Center, Fla.

In addition, Boeing oversaw thousands of subcontractors around the globe and worked with 16 international partners on the project. Between 1998 and 2005, 12 major ISS components were assembled in space. Scientific research was being conducted aboard the ISS in the U.S. laboratory dubbed "Destiny," which holds 24 of the telephone booth–sized International Standard Payload Racks used for science experiments and ISS equipment.

In addition to the laboratory, the ISS had living quarters aboard the Russian-built Zvezda service module. The crew could also make spacewalks from the U.S.-built Quest joint airlock. The Zvezda module also included an airlock. The 300-foot-long (91-meter-long) integrated truss structure and solar arrays, which comprised 9,601 square feet (892 square meters), generated electrical power for the space station.

By November 2005, when ISS clocked its fifth year of providing a continuous human presence in space, it had grown and evolved into a 404,069-pound (183,283-kilogram) laboratory complex with 15,000 cubic feet (425 cubic meters) of habitable volume. Eighty-nine scientific investigations had been conducted on the ISS, which has a microgravity environment that cannot be duplicated on Earth.

On Oct. 1, 2008, Boeing was awarded a $650 million sole-source contract from NASA to continue to deliver and integrate the remaining components and software for the ISS. The contract included the management of a majority of ISS subsystems and specialized ground-based engineering work in disciplines such as materials, electrical parts, environments and electromagnetic effects.

Boeing prepared the last major piece of ISS hardware for delivery In February 2010. Tranquility — formerly referred to as Node 3 — provided additional space for existing life support and environmental control systems. Thales Alenia Space Italy (TASI) had built the utility module and delivered it to NASA. Boeing performed final processing tasks to prepare the module for shuttle integration. Boeing had also produced many of the module's components, including windowpanes, hatches, berthing mechanisms, ammonia hoses, and ventilation and thermal-coolant valves, at the company's Huntsville, Ala., facility, and provided TASI with engineering and testing support.

On March 5, 2010, Boeing officially turned over the U.S. on-orbit segment of the ISS to NASA with the signing of government Form DD-250 at the conclusion of an acceptance review board meeting in Houston. Often referred to as "handing over the keys," the DD-250 is equivalent to a final bill of sale that formally transfers ownership.

But Boeing support to ISS continued. On Sept. 14, 2010, Boeing announced that NASA had awarded the company an extension to the ISS contract for sustaining engineering for hardware and software on the U.S. segment of the ISS and for common hardware and software available to the international partners. The work also included management of ISS subsystems; analytical integration and flight support; on-orbit engineering support; monitoring and trending system performance; anomaly resolution, specialty engineering and oversight of ongoing maintenance.

At a 15-year celebration, on Nov. 20, 2013, John Elbon, vice president and general manager of Boeing’s Space Exploration division, said, "Boeing congratulates NASA and its international partners on 15 years of successful ISS operations. We’ve seen the station grow from a single module in low Earth orbit to the world’s greatest engineering feat. As NASA’s prime contractor for the ISS, Boeing helped build the station, and we are proud of our continuing support for its astronauts as they live and work away from the Earth’s surface."