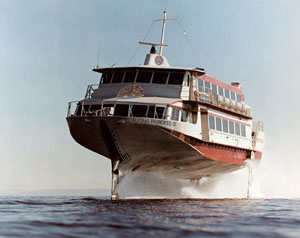 In 1959, Boeing began research and development of hydrofoils. The hydrodynamic test system (HTS), called the Boeing "Aqua-Jet," was launched in 1961. It was a dual-cockpit jet-powered hydroplane that served as an aquatic version of a wind tunnel. Powered by an Allison J-33 jet engine, the HTS was designed to provide a level and stable platform for straightaway runs of up to 132 knots (115 mph/185 kph). A controllable fixture mounted between two prows held models of hydrofoils in the water during the test runs.

In 1962, Boeing built Little Squirt as a company-sponsored research craft, powered by a Boeing Model 520 turbine engine. Water was pumped from a scoop built into the rear foil and out through a nozzle into the air behind the boat. The 20-foot-long (6-meter-long) Little Squirt provided information on foil depth, speeds, operation in rough water and operation amid debris. It had fully submerged foils with movable surfaces for stability and control. These surfaces were connected to a pioneering automatic control systems that sensed and controlled the boat’s height above water as well its pitch, roll and heave.

Boeing Model 883, or FRESH-1 (for "foil research experimental supercavitating hydrofoil"), was part of the U.S Navy’s research into hydrofoils. Boeing designed FRESH-1 to investigate a phenomenon known as cavitation. At high speeds, a void or bubble called a "vapor cavity" can be formed, resulting in reduced efficiency and erratic operation. The foil system was designed to allow the boat to travel beyond speeds that produce cavitation.

PCH-1 ("patrol craft hydrofoil") High Point was the U.S. Navy’s first operational hydrofoil and the first vessel of the Boeing hydrofoil family. The 117-foot-long (35-meter-long) High Point was primarily used for research and the development of antisubmarine warfare concepts. High Point was launched on Aug. 17, 1962, and tested on Puget Sound from 1963 to 1967. Powered by twin gas-turbine engines that drove four propellers, High Point was able to attain speeds of 50 knots (57 mph/92 kph). In 1975, High Point was transferred to the U.S. Coast Guard for evaluation, but without funds to replace a blown engine, it was returned to the Navy and retired.

Boeing Model 923, PGH-2 ("patrol gunboat hydrofoil") Tucumcari was launched in 1967. The 57.5-ton (58.4-tonne), 74.6-foot-long (22.7-meter-long) vessel was made of aluminum with foils and struts of corrosion-resistant steel. It used a waterjet propulsion system and was powered by a 3,200-horsepower Rolls-Royce turbine engine.

Tucumcari served with the U.S. Navy in Vietnam. Later, in August 1970, it was assigned to the Atlantic, where Tucumcari demonstrated its capabilities to eight NATO countries. In November 1972, while operating foil borne at night in the Caribbean, Tucumcari ran aground. No crew were seriously injured, but Tucumcari sustained enough damage while being removed from the reef to keep it from sailing again and was stricken from the record of active Navy vessels.

Italy built six Boeing-designed, Sparviero-class ships based on Tucumcari, and the Patrol Hydrofoil Missileship (PHM) program was formed. The armed hydrofoil was developed under a joint NATO program with the United States, Germany and Italy. The first PHM (Boeing Model 928) was the USS Pegasus (PHM-1) launched in November 1974. It was the first Boeing built craft, and first hydrofoil, to be a listed as a United States Ship (USS).

In 1975, Pegasus made the 1,225-mile (1971-kilometer) trip from Seattle to San Diego in a record-breaking 34 hours, which included one stop for refueling. It was commissioned on July 9, 1977. Five more Pegasus class ships—Hercules, Taurus, Aquila, Aries and Gemini—were built at the Boeing plant in Renton, Wash., between 1981 and 1982.

Armed with a 76 mm rapid-fire cannon and eight AGM-84 Harpoon antiship missiles, the PHM could challenge much larger warships. Because it could be self-sufficient for more than five days at a time and be refueled while under way, the PHM could serve as an escort for convoys or travel as part of an aircraft carrier’s battle group, but its main mission was interdicting smugglers and drug traffickers while based in Key West, Fla. In 1993, the PHMs were decommissioned due to government cutbacks.

Boeing also built commercial hydrofoils. The board gave the go ahead in 1972 for the Jetfoil program. The Boeing Jetfoil (Boeing Model 929) was designed for passenger comfort at high speeds. It gave passengers a smooth and fast ride, and its three narrow struts created a fraction of the wake that a ship of its size would normally make. It was also as quiet as a conventional auto ferry. With a stopping distance of 500 feet (152 meters) and a turning radius of just 645 feet (196 meters), it was easy to maneuver the 90-foot-long (27-meter-long) ship through congested waterways.

The standard configuration of the Jetfoil accommodated 250 passengers, but design flexibility allowed variations for up to 350 seats. The Jetfoils were powered by a pair of Allison gas-turbine engines that each drove a Rocketdyne waterjet pump, which propelled the 115-ton (104.32-tonne) vessel at speeds in excess of 45 knots (51.8 mph/83.3 kph). Boeing built 24 of the Jetfoils, all at the Boeing Renton, Wash., plant, for service in Hong Kong, Japan, the English Channel, the Canary Islands, Saudi Arabia and Indonesia.