In March 1948, Australia and the U.K. entered an agreement to develop a remotely controlled target drone as part of a larger guided-missile testing program to benefit the Royal Australian Air Force (RAAF) and the British Ministry of Supply. The drone was named Jindivik, an Aboriginal name meaning “the hunted one.” The design called for a pilotless target aircraft to fly a 15-minute attack over a maximum range of 1,000 kilometers (621 miles).

The Government Aircraft Factories (GAF) at Fishermans Bend, with support from the Aeronautical Research Laboratory, led the design, and research and development towards the Jindivik. Ian Fleming, who had studied at the University of Sydney and Cambridge, was the chief designer and later became General Manager of the GAF after his success designing the Jindivik.

The design included a turbojet engine aboard an aircraft guided by radar. In the nose cone was a large transmitter that received commands from a grounded pilot at a nearby radar station or a shepherding aircraft. The Department of Supply conducted the research and development towards the indigenously designed and manufactured Jindivik. GAF delivered the first Jindivik, the Mk 1, in October 1951. GAF built 12 Mk 1s before modifying the Jindivik to include an Armstrong Siddeley Viper ASV.3 turbojet, renaming the aircraft the Mk 2. During this time, Rolls-Royce acquired Armstrong Siddeley. The Viper flew on all subsequent Jindiviks, ending with the Mk 201.

On Aug. 28, 1952, GAF flew the Jindivik for the first time at Evetts Fields near Woomera Test Range. Flown by the RAAF Air Trials Unit, the first flight was a success. The Jindivik took off from a recoverable trolley propelled by a disposable Armstrong Siddeley Adder ASA.1 turbojet engine. The Jindivik’s maximum flight of 1,000 kilometers (621 miles) concluded by landing on a skid. The first deliveries to the RAAF and to Britain followed shortly after with later orders received from the U.S. and Sweden, earning GAF $34 million in sales between 1952 and 1977, with the last delivery in 1986.

In total, 502 Jindiviks were produced between 1952 and 1986, and again in 1997 when the U.K. placed another order for 15 Jindiviks. The Jindivik provided a variety of military applications, given its ability to fly low and high altitudes. The Jindivik was capable of carrying camera systems for reconnaissance and serving as a physical decoy while also projecting decoy radio frequencies to counter enemy tracking systems. The Jindivik could also trail smoke and carried countermeasure flares for live fire tests. These capaabilities made the Jindivik a formidable test target against aircraft such as the A-4 Skyhawk armed with Sidewinder missiles. The Jindivik was an effective enemy simulator vehicle, often evading Sidewinders flying as high as 17,375 meters (57,000 feet) and as low as just meters above the sea or land.

The Jindivik ended service in 1998 with a highly successful service record. Designed to be expendable, many Jindiviks actually flew multiple times. The Jindivik served with four different militaries for several decades. 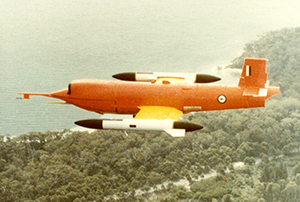