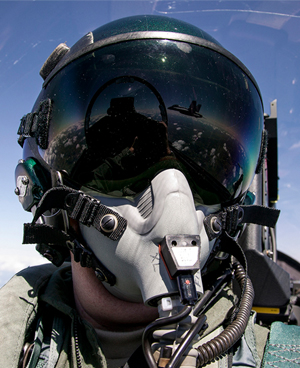 The Boeing Joint Helmet Mounted Cueing System (JHMCS) combines a magnetic head tracker with a display projected onto a pilot's visor, giving the pilot a targeting device that can be used to aim sensors and weapons wherever the pilot is looking. It does so by synchronizing aircraft sensors with the user's head movements so they automatically point where the pilot looks and displaying flight information on the inside of the helmet visor so data is always in view.

In a dual-seat aircraft, each crewmember can wear a JHMCS helmet and perform independent operations with continuous awareness of where the other crewmember is looking.

In July 2000, Boeing received U.S. Navy approval for JHMCS to proceed into low-rate initial production and deliver 36 systems as part of the F/A-18E/F Super Hornet aircraft that would be delivered in fiscal year 2002.

The Navy began F/A-18E/F Super Hornet flight testing of the JHMCS in April 2001.