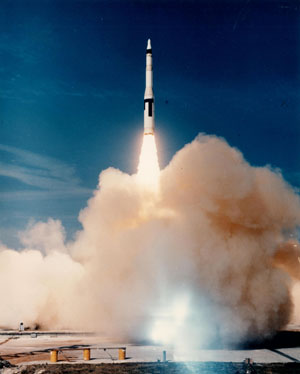 On Feb. 27, 1958, the U.S. Air Force received approval from the Department of Defense to begin research and development on the new missile designated Weapon System 133-A, called the “Minuteman.” The design called for a three-stage, solid-fueled missile that was to be extremely reliable, quick to launch, have maximum simplicity and a high capability for survival, and be able to remain on alert in its silo 24 hours a day, 7 days a week for many years.

On Oct. 9, 1958, the Air Force announced its selection of Boeing as assembly and test contractor for the Minuteman missile, beginning one of the most complex, largest and longest running programs in Boeing history. At its peak, it would employ 39,700 people located at Boeing sites in Seattle and at the missile final assembly site at Plant 77 in Ogden, Utah.

Boeing teamed with nine other industry contractors — including North American Aviation’s Autonetics Division, based in Anaheim, Calif. — to build, test and deploy the missiles. In 1996, Autonetics joined The Boeing Company as part of the Boeing acquisition of Rockwell International’s aerospace and defense businesses.

The first launch of a Minuteman was conducted at Cape Canaveral, Fla., on Feb. 1, 1961. Within a month, construction began on the first base for the missile. On Nov. 17, 1961, the first successful launch from a silo occurred.

The first operational Minuteman site was Malmstrom Air Force Base, Mont., where the first 10-missile “flight” was rushed into activation on Oct. 27, 1962, at the height of the Cuban Missile Crisis. President Kennedy referred to the missiles as his “ace in hole” during the historic standoff with the Soviet Union.

Within five years, 1,000 missiles were operational in Montana, Missouri, North Dakota, South Dakota and Wyoming. Each Minuteman was housed in its own hardened underground launch silo, which was approximately 80 feet (24 meters) deep and 12 feet (4 meters) in diameter. The company built, installed and maintained the missiles in their silos and trained Air Force personnel involved in the program.

The Minuteman program established Boeing as a leader in large-scale system integration. Today, the combined heritage of the Minuteman programs of Boeing and Autonetics continues as Boeing Strategic Deterrence Systems (SDS), supporting the Air Force with system evaluation, testing, training and modernization.