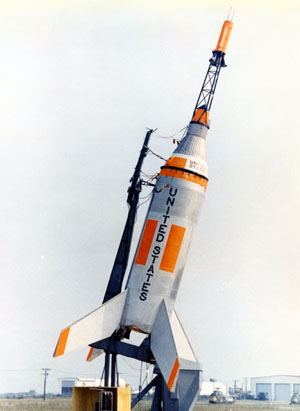 The Little Joe booster was a low-cost launcher designed to test the escape system and heat shield for the manned Mercury spacecraft. NASA awarded the contract on Dec. 29, 1958, to the Missile Division of North American Aviation. Each launcher cost only about $200,000. With its four large stabilizing fins protruding from its clustered solid rocket motor airframe, Little Joe was the only booster system designed specifically for manned capsule qualifications and was also one of the pioneer operational launch vehicles using the rocket-cluster principle.

Because initial solid-section drawings showed four holes up, the project was named “Little Joe” after a crap-game throw of a double deuce on the dice. The project saved money by allowing numerous test flights to identify solutions to problems associated with the development of manned space flight, especially the problem of escaping from an explosion midway through takeoff.

The unguided vehicle was propelled by eight solid-fuel rocket engines. Various combinations of Pollux, Castor and small Recruit engines were selected according to the trajectory desired for each flight. Typically, all four Recruits would ignite simultaneously with two larger motors, while two more large motors would ignite later in the flight. The first five launch attempts used preliminary boilerplate capsules, while the final three attempts carried full production Mercury spacecraft atop an extended spacecraft adapter.

On Oct. 4, 1959, the first Little Joe I took off from Wallops Island, Va. Designated LJ-6 (Little Joe flights were numbered according to their mission goals rather than chronologically), it launched a boilerplate Mercury capsule. The five-minute flight proved the rocket for the following tests of launch escape system.

On Jan. 21, 1960, LJ-1B lifted off from Wallops Island, carrying the rhesus monkey named “Miss Sam.” At an altitude of 9 miles (14.5 kilometers), the Mercury escape rocket fired, pulling the boilerplate spacecraft and its primate payload from the booster. Both the escape system and the monkey came through with flying colors, proving that even a failed Mercury flight would be survivable. The success of LJ-1B meant that the next flight, the sixth, to be known as LJ-5, would be the first to fly a real Mercury capsule from the McDonnell production line.

The final series of flights was to test an actual production spacecraft in a max-q abort. Two attempts, L3-5 and LJ-5A, failed, as escape rocket firings were mistimed. The capsule was recovered and renovated to fly aboard the last Little Joe I.

LJ-5B lifted off from Wallops Island on April 28, 1961. Because one rocket motor failed to ignite, the resulting trajectory was abnormally low. In spite of the unexpectedly harsh conditions, the escape rockets performed well, and the Mercury capsule survived in good shape. In eight launch attempts, the Little Joe I had fulfilled its mission, proving that the Mercury escape system could perform its job under the harshest conditions expected in a manned Mercury flight.