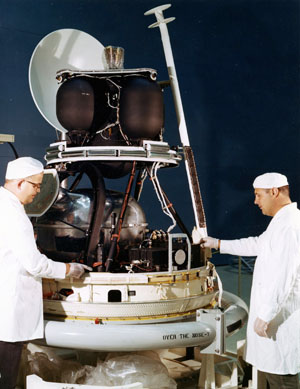 On Aug. 14, 1966, Lunar Orbiter 1 was the first U.S. spacecraft to orbit the moon. Its mission was to obtain photographs of the moon’s surface. The photos sent by each of the five Lunar Orbiters helped NASA select safe landing sites for the Apollo astronauts. Other program objectives were to collect data on the moon’s gravitational field, and study radiation and micrometeoroid flux in the vicinity of the moon.

Although Boeing came in with the highest bid, it had many factors in its favor. NASA’s Lunar Orbiter Project Office recommended that the company, along with its subcontractors Eastman Kodak and RCA, build the Lunar Orbiters. A final contract for five orbiters was signed on May 7, 1964.

Using film laminated with darkroom chemicals, the orbiter took pictures of the moon's surface. Heat processed the film in space. Light, flashed through the resulting negative, created beams that were converted into electrical signals for transmission to Earth, where the image was pieced together.

More than 90 percent of the pictures taken were transmitted successfully, including the historic Earth-rise taken from the moon Aug. 23, 1966. It was hailed at that time as the greatest photograph of the 20th century. The five orbiters took pictures of approximately 99 percent of the moon's surfaces — more than 14 million square miles (22.5 million kilometers). Lunar Orbiter photographs have provided the basis for all accurate maps of the moon.

The Lunar Orbiters were built at the Boeing Missile Production Center in Seattle, Wash., and were tested there and at the space environment test chamber at the then-new Boeing Space Center in Kent, Wash.

Orbiters 1, 2 and 3 fulfilled the program’s original mission objectives, which allowed the last two orbiters to perform broader scientific studies. Both Orbiter 4 and 5 were placed into near-polar orbits and made broad photographic surveys of the lunar surface.

The Lunar Orbiters gave the Apollo project valuable data about the moon and its environment as well as flight operations experience in tracking spacecraft in lunar orbit. The alternative to sending the orbiters was a single manned Apollo mission that would have been considerably more expensive than the entire Lunar Orbiter program — and could have forced the United States to miss the goal proposed by President Kennedy for a manned landing on the moon before the end of the decade.