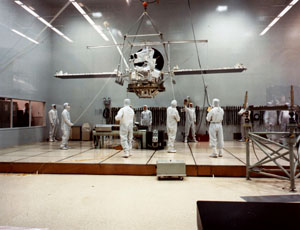 It made the first dual-planet spaceflight by launching to Mercury using the gravitational pull of Venus. The probe’s two television cameras, a radio transmitter and data collection equipment were protected from the sun’s heat by solar panels.

By March 1974, Mariner 10 had transmitted hundreds of television images and large quantities of data about the two planets back to Earth. It revealed cloud circulation patterns on Venus and the lack of a magnetic field and took the first high-resolution photographs of Mercury’s cratered surface.

The National Society of Professional Engineers named Mariner 10 as one of the top 10 engineering achievements of 1974.