The Genie was the world’s first nuclear-armed air-to-air weapon and was the most powerful interceptor missile ever deployed by the U.S. Air Force.

In 1954, Douglas Aircraft Co. began work on a small unguided nuclear-armed air-to-air missile and started full-scale development a year later. In 1955 and early 1956, F-89D Scorpion aircraft made the first test firings. The top-secret project had several code names, including “Bird Dog,” “Ding Dong” and “High Card.” Finally, it was designated MB-1 and called the “Genie.” The MB-1 became operational in 1957, and the first and only live firing of a nuclear Genie was July 19, 1957.

Powered by a Thiokol SR49 solid-fueled rocket motor, it was armed with a 1.5-kiloton nuclear warhead and had flip-out fins for flight stability. F-89J, F-101B and F-106A interceptors carried the Genie. The firing aircraft had to pull away in a sharp turn to escape the blast after launching the weapon, a challenging feat.

In June 1963, the Genie rockets were designated in the AIR-2 series. The MB-1 became the AIR-2A, the MB-1-T was the ATR-2A, and the MMB-1 was the AIR-2B. The training rocket was officially designated ATR-2A and also known as ATR-2N.

Douglas built more than 1,000 Genie rockets before terminating production in 1962. However, in 1965, Thiokol began producing a motor for the AIR-2 with a longer lifespan and wider firing temperature limits. After the mid 1970s, upgraded Genie rockets were designated AIR-2B. The Air Force removed the last AIR-2 rockets from the inventory during the early 1980s. 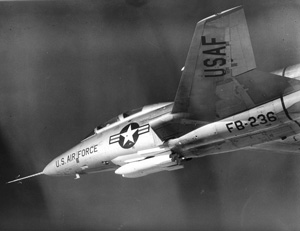