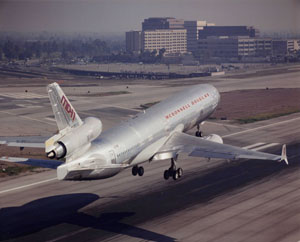 The MD-11 was 18.6 feet (5.6 meters) longer than the DC-10 trijet, from which it was derived, and carried about 50 more passengers. It was produced in Long Beach, Calif. A worldwide network of subcontractors and suppliers supported the assembly line.

The MD-11 was available in four models: passenger, all freighter, convertible freighter and “combi,” where passengers and freight were carried on the main deck and additional freight below the deck. An extended-range (ER) feature was available on all versions.

Seating capacities on the standard airplane varied from 285 in a three-class arrangement to 410 in an all-economy configuration. Advances in aerodynamics, propulsion, aircraft systems, cockpit avionics and interior design contributed to the performance and operating economy of all MD-11 models. Aerodynamic improvements included winglets and a redesigned wing trailing edge, a smaller horizontal tail with integral fuel tanks and an extended tailcone. These features reduced drag, saved fuel and added range.

By January 1998, 174 MD-11s had been delivered, and the aircraft was in service with more than 20 operators, serving more than 100 cities in 55 countries with more than 270 scheduled daily flights. The fleet had compiled more than 2.7 million revenue flight-hours and 1.3 billion statute miles (2 billion kilometers), carrying nearly 70 million passengers.