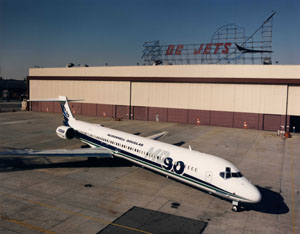 The McDonnell Douglas MD-80 and MD-90 families of jetliners were built on the same assembly line in Long Beach, Calif.

Conceived as a stretched variant of the DC-9, the MD-80 made its first flight as the DC-9 Super 80. The MD-80 Series of twinjets, featuring many advances in technology, was certified by the Federal Aviation Administration in August 1980 and entered airline service three months later.

The MD-90 was an advanced midsized, medium-range airliner that was first delivered in February 1995 and entered service two months later.