The Soviet Union’s launching of the satellite Sputnik on Oct. 4, 1957, set off the Space Race. The United States would answer the challenge with its own manned space program — Project Mercury.

The selection of McDonnell Aircraft Corp. to design, test and build Project Mercury, NASA’s new spacecraft, was at first a carefully guarded secret. The detailed contract was signed on Feb. 6, 1959.

Over the next 2-1/2 years, McDonnell worked closely with NASA and some 4,000 suppliers and contractors throughout the country to make Project Mercury a reality. Ultimately, McDonnell would design, develop and build 20 Mercury spacecraft, two procedural trainers, and ground support and checkout equipment.

The Mercury spacecraft was a 9-foot-tall (2.7-meter-tall), 74-inch-wide (1.8-meter-wide) cone-shaped craft that weighed approximately 1 ton (0.45 tonnes) fully loaded. It was made of strong, lightweight materials such as titanium and beryllium. The spacecraft was designed so that it could be operated automatically, manually or by ground control. The spacecraft cabins were equipped with molded, contoured couches made of a crushable honeycomb aluminum bonded to a fiberglass shell and lined with protective rubber padding that would transmit bodily loads evenly during peak acceleration and deceleration periods of the missions. Mercury spacecraft were equipped with a 100 percent oxygen environment within the cabin, and the astronauts had spacesuits with a separate oxygen supply.

On May 5, 1961, in the Mercury spacecraft Freedom 7, Alan Shepard became the first American to make a suborbital space flight. On May 25, 1961, President John F. Kennedy gave a speech before a joint session of Congress noting his decision for the United States to send an American to the moon and back by the end of the decade. President Kennedy stated, “Space is open to us now; and our eagerness to share its meaning is not governed by the efforts of others. We go into space because whatever mankind must undertake, free men must fully share.” President Kennedy’s speech, with the support of Congress, eventually led to the Gemini and Apollo programs.

By the time the final Mercury spacecraft splashed down on May 16, 1963, McDonnell had delivered 20 vehicles, and the spacecraft had compiled 53 hours, 55 minutes, 25 seconds of crewed space flight time. 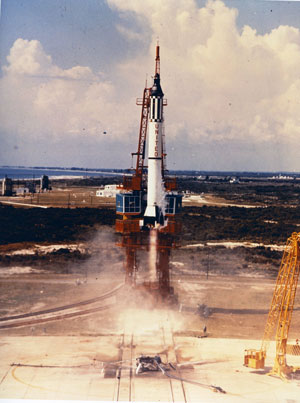