In 1952, the French government issued a call to the French aviation industry for a jet-powered interceptor fighter aircraft. Paris-based Avions Marcel Dassault (now Dassault Aviation) answered with a proposal for the Mystère-Delta MD550 and began flight testing the aircraft in 1953. Yet, this Mirage predecessor fell short of required weight and speed specifications. Dassault kept the delta-wing design, but altered the engine configuration, which led to the Mirage III 001. The Mirage III design included a Snecma Atar 101 turbojet engine, and was later accepted by the Armée de l’Aire (French Air Force). The French Air Force was particularly concerned about cost and weight of aircraft, as the Cold War battlefield featured more sophisticated, faster competition.

The Mirage III flew for the first time at Melun-Villaroche on Nov. 17, 1956, with Roland Glavany in the cockpit. Glavany was among Dassault’s most experienced test pilots having World War II flight experience, flying missions to Corsica, Elba, and Provence. After the war, he earned his engineering degree from France’s prestigious Institut Supérior de L’aéronautique. His first assignment as a test pilot was the Mirage I and Mirage III. A year after Glavany’s flights, the French government purchased its first Mirage IIIs from Dassault following an impressive showing at the Paris Air Show.

Dassault produced the first Mirage IIIA in May 1957; this Mirage was essentially designed as an all-purpose aircraft, given the French Air Force’s limited financial resources. In May 1958, again with Glavany at the controls, the Mirage IIIA achieved the first Mach 2 flight in France. By 1960, Dassault produced several variants of the Mirage III and opened the aircraft to international licensing. The Royal Australian Air Force (RAAF) began its search for a single-seat interceptor aircraft for its arsenal to replace the North American Aviation Sabre. In 1964, Australia set about building the first Mirage IIIs. Government Aircraft Factories (GAF) assembled the aircraft while Commonwealth Aircraft Corp. (CAC) subcontracted to build the wings and other components. Ian Fleming, who designed the Jindivik and became general manager of GAF, facilitated and oversaw the licensing process.

The RAAF received its first delivery from CAC in 1964, and eventually operated three different variants of the Mirage III, including the IIIO(F), IIO(A) and the IIID. The RAAF received 197 Mirage IIIs in total, all built by CAC. The Mirage III served the longest on the frontline than any other fighter in the RAAF (until the F/A-18 entered service) though it never saw combat, despite a deployment to Malaysia in 1967. The Mirage III served in four different squadrons at Base Williamtown.

This long service record was partially due to the fact that it long outlived its estimated design life of 1,500 flight hours. Several Australian Mirages flew well beyond 4,000 flight hours. The RAAF actually planned to phase the Mirage III fleet out by 1979, especially after it was used more than expected. However, the Aeronautical Research Laboratories in Fisherman’s Bend extended the aircraft’s lifecycle by designing fiber repair patches, which prevented wing cracks from spreading. Thus, the Mirage III served the RAAF nearly a decade longer than planned.

The final Mirage III delivery came in 1979, fulfilling the RAAF plan to begin its phase out. The Mirage III’s service to the RAAF ended on Sept. 30, 1988, when many went into storage in Point Cook and Woomera. Pakistan purchased 50 of the 197 Australian Mirages in 1990. 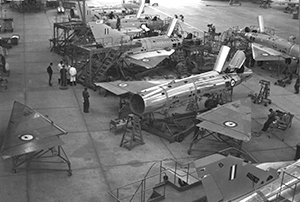