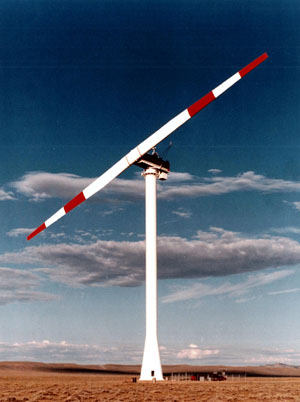 During the early 1970s, Boeing Engineering and Construction Co. took a world leadership role in the design and development of large wind energy systems.

The federal wind energy system was initiated in 1973 by the National Science Foundation and absorbed in 1977 into the Department of Energy (DOE). Its goal was to demonstrate the commercial feasibility of wind power.

That same year, Boeing won the NASA and DOE contract for design, fabrication, construction, installation and testing of 2,500-kilowatt wind turbine systems. Five turbines, designated MOD-2, went into action during the early 1980s. Three were started up during a dedication ceremony May 29, 1981, at Goodnoe Hills, about 13 miles east of Goldendale, Wash.

The Bonneville Power Administration bought output of the Goodnoe Hills machines and integrated it into the regional power grid through lines owned by Klickitat County Public Utility District, and the three machines working together became the first "wind farm" in the world. In April 1982, Boeing completed its first wind turbine for a commercial customer, Pacific Gas and Electric Co. of San Francisco, and erected it in Solano County, northern California. On Sept. 2, 1982, the fifth and final MOD-2 began operating at Medicine Bow, Wyo.

The MOD-2 wind turbines of Goodnoe Hills were running through 1986 and then dismantled. In 1985, the last full year of operation, the combined electrical output of the three turbines was 8,251 megawatt-hours—enough to power about 1,000 average Northwest homes for a year. Project manager Peter Goldman called the five-year, $55 million research project "an absolute success." The Medicine Bow MOD-2 wind turbine was sold for scrap metal in 1987 and dynamited over.

Early in 1988, operation of the turbine was transferred to Hawaiian Electric Inc., then to the Makani Uwila Power Corp. (MUPC) and kept in service intermittently until late in 1996. At that time, due to financial difficulties, the wind turbine was shut down, along with the rest of MUPC, and passed to the property owner, Campbell Estates. With no prospects for continued operation, Campbell Estates decided to disassemble and scrap the MOD-5B. Before this decommissioning, the DOE salvaged the drive train gearbox and generator in July 1998.

Although Boeing got out of the wind turbine business during the late 1980s and returned to its more traditional products of aircraft and spacecraft, the Boeing-built wind turbines set several world records for diameter and power output. In 1987, the MOD-5B was the largest single wind turbine operating in the world. It featured the first large-scale variable speed drive train and a sectioned, two-blade rotor that enabled easy transport of the blades.