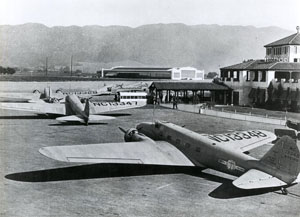 The revolutionary Boeing Model 247, developed in 1933, was an all-metal, twin-engine airplane and the first modern passenger airliner. It had a gyro panel for instrument flying, an autopilot, pneumatically operated de-icing equipment, a variable-pitch propeller and retractable landing gear.

It took the Model 247 20 hours, with seven stops, to fly between New York and Los Angeles. However, because the 247 flew at 189 mph (304 kph), its trip was seven and a half hours shorter than that made by any previous airliners.

Seventy-five 247s were built. Boeing Air Transport flew 60 Model 247s. United Aircraft Corp. flew 10, and the rest went to Deutsche Lufthansa and a private owner in China. The 247s remained in airline service until World War II, when several were converted into C-73 transports and trainers. Some were still flying in the late 1960s.

Along with the Douglas DC-2 that supplanted it, the Model 247 ushered in the age of speed, reliability, safety and comfort in air travel.