The Boeing Model 307 Stratoliner was the world’s first high-altitude commercial transport and the first four-engine airliner in scheduled domestic service. With names such as Rainbow, Comet, Flying Cloud and Apache, the Stratoliner set new standards for speed and comfort.

Its pressurized cabin allowed the airplane to soar above rough weather at an altitude of 20,000 feet (6,096 meters) — higher than any other transport of its time. Its circular fuselage provided maximum space for the five crew members and 33 passengers. The nearly 12-foot-wide (3.6-meter-wide) cabin had space for comfortable berths for overnight travelers.

The Stratoliners attracted the attention of multimillionaire Howard Hughes, who bought one for himself and transformed it into a “flying penthouse” with a master bedroom, two bathrooms, a galley, a bar and a large living room. Hughes sold it to a Texas oil millionaire, and it eventually became a Florida houseboat.

The Stratoliner was the first airplane to have a flight engineer as a member of the crew. The engineer was responsible for maintaining power settings, pressurization and other subsystems, leaving the pilot free to concentrate on other aspects of flying the aircraft.

Boeing built 10 Stratoliners. In 1940, the 307s started flying routes to Latin America and from New York to Los Angeles. Production stopped at the onset of war, and five were drafted into the Army Transport Command as C-75 military transports.

The last remaining Stratoliner, flown by Pan American as Clipper Flying Cloud, was purchased by the Smithsonian’s National Air and Space Museum in 1969. After being stored in the Arizona desert for 20 years, it was restored at Boeing in Seattle, Wash., and in August 2003, it flew to its new home on permanent display at the museum’s new companion facility, the Steven F. Udvar-Hazy Center near the Washington, D.C., Dulles International Airport. 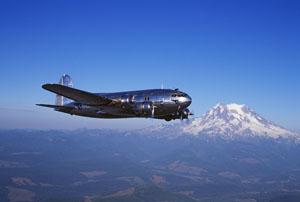