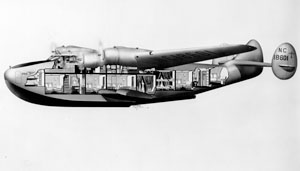 As airplane travel became popular during the mid-1930s, passengers wanted to fly across the ocean, so Pan American Airlines asked for a long-range, four-engine flying boat. In response, Boeing developed the Model 314, nicknamed the “Clipper” after the great oceangoing sailing ships.

The Clipper used the wings and engine nacelles of the giant Boeing XB-15 bomber on the flying boat’s towering, whale-shaped body. The installation of new Wright 1,500-horsepower Double Cyclone engines eliminated the lack of power that handicapped the XB-15. With a nose similar to that of the modern 747, the Clipper was the “jumbo” airplane of its time.

The Model 314 had a 3,500-mile range and made the first scheduled trans-Atlantic flight June 28, 1939. By the year’s end, Clippers were routinely flying across the Pacific. Clipper passengers looked down at the sea from large windows and enjoyed the comforts of dressing rooms, a dining salon that could be turned into a lounge and a bridal suite. The Clipper’s 74 seats converted into 40 bunks for overnight travelers. Four-star hotels catered gourmet meals served from its galley.

Boeing built 12 Model 314s between 1938 and 1941. At the outbreak of World War II, the Clipper was drafted into service to ferry materials and personnel. Few other aircraft of the day could meet the wartime distance and load requirements. President Franklin D. Roosevelt traveled by Boeing Clipper to meet with Winston Churchill at the Casablanca Conference in 1943. On the way home, Roosevelt celebrated his birthday in the flying boat’s dining room.