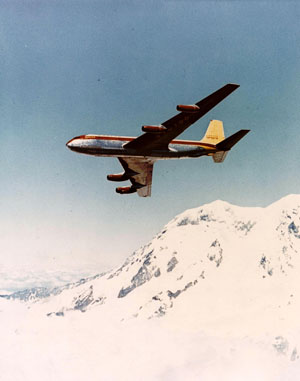 Seventy-two-year-old William Boeing came back to visit his former company for the May 14, 1954, rollout of the Model 367-80 at the Renton, Wash., plant. His wife, Bertha, christened the yellow and brown airplane with real champagne, and the Renton High School band played the Air Force theme. It was the prototype for the 707 passenger jet and the KC-135 jet tanker and would be the first member of the “700” family of commercial and military jets.

The Boeing Company had invested $16 million (two-thirds of the company’s net profits from the post-war years) to build this prototype for a long-range jet aircraft. It was developed in secrecy and designated Model 367-80 to disguise it as merely an improved version of the C-97 Stratofreighter. It was subsequently nicknamed the “Dash 80,” had jet engines and swept wings, and was very different from the straight-wing, propeller-powered Stratofreighter. When the Dash 80 was almost finished, the company gambled again — by tooling and gearing up for a production aircraft, although neither the Air Force, nor any airline, had placed a single order.

Because the prototype was constructed to sell first as a military-tanker transport, it had few windows and no seats, but had two large cargo doors. A week after its first flight, the Air Force ordered 29 tanker versions, the KC-135. The commercial version, the 707, however, faced tough competition from the Douglas DC-8. Boeing salespeople directed their efforts to Pan American World Airways, Trans World Airlines and large European airlines. On Oct. 14, Pan Am ordered 20 707s. At the same time, Pan Am ordered 25 DC-8s. The race was on.

In 1972, the Dash 80 became part of the Smithsonian’s National Air and Space Museum collection. In August 2003, it flew to its new home on permanent display at the museum’s new companion facility, the Steven F. Udvar-Hazy Center near Washington, D.C.’s Dulles International Airport.