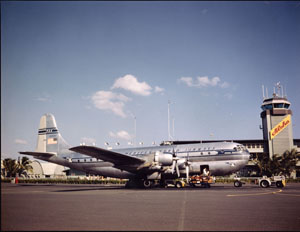 After World War II, Boeing reentered the commercial market with a new long-range airliner, the Stratocruiser (Model 377). It was the first Boeing commercial transport since the Stratoliner, and like its military counterpart, the C-97, was based on the B-29 Bomber. It possessed all the speed and technical improvements available to bombers at the end of the war.

The Stratocruiser set a new standard for luxurious air travel with its tastefully decorated extra-wide passenger cabin and gold-appointed dressing rooms. A circular staircase led to a lower deck beverage lounge, and flight attendants prepared hot meals for 50 to 100 people in a state-of-the-art galley. As a sleeper, the Stratocruiser was equipped with 28 upper-and-lower bunk units.

Pan American placed the first order for 20 Stratocruisers, worth $24 million, and they began service between San Francisco, Calif., and Honolulu, Hawaii, in 1949. Boeing built 56 Stratocruisers between 1947 and 1950. The airplane marked the company's first significant success selling passenger planes to airlines in other countries.

During the early 1960s, Aero Spacelines ballooned the Stratocruiser's fuselage into a whale-like shape to carry spacecraft sections. Nine of the variants were assembled. The first was called the "Pregnant Guppy," followed by five larger "Super Guppies" and three smaller "Mini Guppies."