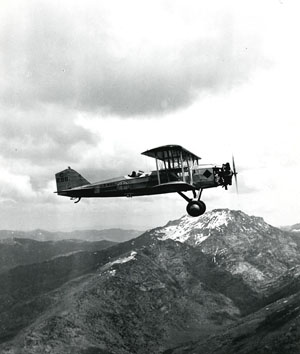 The first Model 40 was built for a 1925 U.S. Post Office competition as a replacement for the converted military de Havillands that had carried the airmail since 1918.

The Model 40 used steel tubing for the nose and curved wood-veneer laminate for the middle of the fuselage. The wings were wood and fabric. The plane was hampered by the antiquated water-cooled Liberty engine, required by the government in order to use up large stocks of surplus war equipment.

The Boeing Model 40A, which first flew May 20, 1927, used an air-cooled Pratt & Whitney Wasp engine that was about 200 pounds (91 kilograms) lighter than the water-cooled engines used to power its competitors. The biplane used welded-steel tubing throughout its fuselage but could still carry a heavier load and was less expensive to operate.

The Model 40A was the first Boeing airplane to carry airline passengers, with room for two people in a tiny cabin, as well as cargo space for mail. Twenty-four of the Model 40A mail planes were ready to fly July 1, 1927, for their first day of airmail service between San Francisco, Calif., and Chicago, Ill. The 25th was delivered to Pratt & Whitney as a flying testbed.