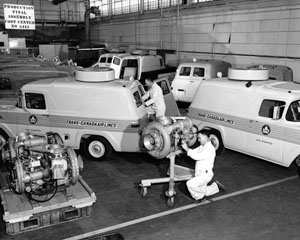 Boeing was a major producer of small turbine engines during the 1950s and 1960s. The engines represented one of the company's major efforts to expand its product base beyond military aircraft after World War II.

Development on the gasoline turbine engine started in 1943, with the early engines providing about 160 horsepower. Boeing then focused most of its efforts on a two-shaft turbine engine that the company produced in 1947. In this type, the output shaft and transmission were separated from the engine itself.

A Boeing-developed gas engine with 175 horsepower was tested on a Kenworth truck in 1950. The engine then was tested on U.S. Navy boats in Lake Washington, near Seattle. By the 1960s, the engine provided about 500 horsepower.

Boeing built 2,461 engines before production ceased in April 1968. Many applications of the Boeing gas turbine engines were considered to be firsts, including the first turbine-powered helicopter and boat. More than 746 QH-50C/D radio-controlled drones with Boeing T-50 turbines were built for the Navy antisubmarine helicopter program during the 1960s. More than 300 Boeing 551 and 553 turbines powered Swedish armored fighting vehicles.

In 1966, a number of major programs were competing for the company's limited resources, and the decision was made not to continue pursuing the turbine engine business. While limited production to fulfill contract obligations would continue until 1968, most of the division's resources and engineers were reassigned to other programs, in particular the development of the giant 747 jetliner. The small annual profit of the Turbine Division was dwarfed by the promise of an equal amount from the sale of each 747.