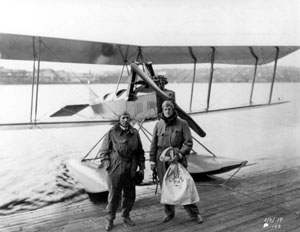 The Model C two-place training seaplane was the first "all Boeing" design and the company's first financial success.

A total of 56 C-type trainers were built. Fifty-five used twin pontoons. The Model C-1F had a single main pontoon and small auxiliary floats under each wing and was powered by a Curtiss OX-5 engine.

The U.S. Navy bought 51 of the Model C trainers, including the C-1F, and the Army bought two landplane versions with side-by-side seating, designated the EA.

The final Model C was built for William Boeing and called the C-700 (the last Navy plane had been Navy serial number 699). Boeing and Eddie Hubbard flew the C-700 on the first international mail delivery from Vancouver, B.C., to Seattle, Wash., on March 3, 1919.