Arguably the best fighter plane of the Second World War, the Mustang was selected by the Australian Government to fulfill an urgent need by the Royal Australian Air Force (RAAF) for a new fighter at the height of the war in the Pacific. Commonwealth Aircraft Corp. (CAC) had already built a relationship with Boeing heritage company North American Aviation during its work on the Wirraway, and was selected to manufacture the Mustang Mk IV (P-51D) under license. North American shipped 80 unassembled P-51D-1 (NA-110) Mustangs to CAC; these were designated CA-17 by CAC and Mustang Mk 20 by the RAAF. The first Australian-assembled Mustang, A68-1, flew from Fishermans Bend on Apr. 29, 1945. The first Mustang was turned over to the RAAF on June 4, 1945.

Produced too late for World War II, RAAF Mustangs were assigned to Japan for occupation duties. In early 1946, Mustang Wing No. 81, comprised of Nos. 76, 77 and 82 Squadrons, flew into Iwakuni.

In 1949, the Mustangs of No. 77 Squadron remained in Japan, but when war broke out on the Korean peninsula in June 1950, U.S. Army General Douglas MacArthur requested that the squadron provide ground support for the hard-pressed UN forces holding the Pusan Perimeter. Later, on July 2, 1950, No. 77 Squadron flew its first mission over North Korea, escorting Boeing B-29 Superfortresses.

Australian Mustangs continued combat missions until April 1951, when they were replaced by Gloster Meteors, and remained in service with Citizen's Air Force Squadrons until 1959. 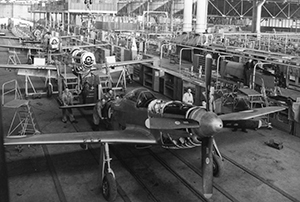