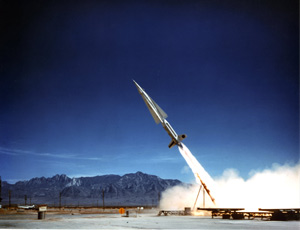 The first Douglas Aircraft Co. Nike Ajax knocked out a target drone in November 1951. It was the first operational ground-based supersonic anti-aircraft missile in the United States and was deployed at sites in a circular pattern around key American industrial and military locations. The first Nike Ajax missile site became operational at Fort Meade, Maryland, in 1954.

The Nike Hercules became operational in 1958, and more than 80 Nike Hercules missiles were deployed in the United States, with 10 more in Europe and Taiwan. It was followed by the Nike Zeus missile, which had a preliminary test firing Aug. 26, 1959, and could fly more than 8,000 mph (12,874 kph).

Nike missiles were launched from a self-contained launch area, and each site had two or three launching platforms. The missiles, stored underground on rails, were brought to the surface by elevators. Once on the surface, they were pushed on rails to an erector and raised to an angle of about 85 degrees for firing.

The Nike missiles used the “command guidance” system, in which the major control equipment was ground based and not part of the expendable missile. A control area, at least 1,000 yards (914 meters) from the launch area, contained separate radars that simultaneously located and tracked both the target and the Nike missile and guided the missile to the target.