In 1965, the Government Aircraft Factories (GAF) began Project N, which was intended to be a two-engine multipurpose transport plane. The federal government sought a new transport plane for the Army that could also be aimed at the civilian market and would sustain aircraft manufacturing at GAF with the end of Mirage III production. With government funding, GAF developed two prototypes: the N22B became the military transport and the N24 was a longer civilian version.

The Australian Army required a transport aircraft with greater range, two engines, and short take-off and landing (STOL) capabilities. The GAF settled on the Nomad twin-turboprop transport. Early designs, which were later adopted, included a rear-loading access swing door. GAF aeronautical engineer Alan Wrigley designed the Nomad for several purposes, including surveillance, medical evacuation, personnel and supply transport, and search and rescue. The military variant could carry two crew and 11 passengers, ideally in all weather conditions over particularly rugged terrain, such as that of Papua New Guinea to the north of Australia.

The first Nomad, the military variant N22 (VH-SUP), flew on July 23, 1971, at Avalon airfield in Victoria, with Stuart Pearce at the controls. Pearce was among GAF’s most experienced test pilots, having served in the British Royal Air Force, and rose to become the chief test pilot at GAF based at Avalon. Unfortunately, five years later, unresolved issues with the Nomad would cost Pearce his life, and the airworthiness of the Nomad became increasingly apparent.

Early in the Nomad’s history, the aircraft experienced several incidents, which quickly gave it a negative reputation regarding safety. During a July 1973 flight from Canberra to Melbourne, both of a Nomad’s engines failed due to icing. The GAF pilots glided the aircraft to a landing near Mansfield, Victoria, though the aircraft had sustained major damage. On Aug. 6, 1976, a Nomad prototype crashed while Stuart Pearce and a GAF chief designer studied the aircraft’s tailplane flutter, killing both men. Over the course of the aircraft’s lifecycle, Nomad-related accidents caused 76 fatalities. The Nomad’s aerodynamic instability due to the tailplane structure remained the primary airworthiness concern, which was left largely unrevised by the designers.

Ultimately, the safety concerns led to the end of Nomad production in 1984 at 172, 28 shy of the 200 aircraft economic breakpoint. While the aircraft met many military needs for flight capability and transport, its airworthiness concerns kept it from many potential buyers.

Former Nomad developer and cofounder of Gippsland Aeronautics, George Morgan, considered buying the aircraft certificate and eventually restarting production of the N24A variant. GAF, which later became Aerospace Technologies of Australia, now part of Boeing, sold the certificate to Gippsland. Yet, as of 2017, only one Nomad remained in operation. 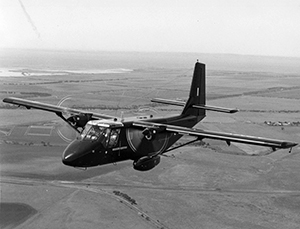